Do you ever work really hard and feel like you got nothing out of it? Or, even more to the point, ever work a long time on developing a skill, and have the feeling that you’re getting worse instead of better? Chances are, no matter what you’re into, you’ve experienced this: in sports, in academics, in music, in chess, and, certainly, in markets and trading. This feeling can be frustrating, and is one of the reasons why many learners quit before achieving mastery, but there’s a good reason for it.

Take a look at the chart above, which shows a learner’s skill in a task (vertical axis) as a function of time spent learning (horizontal axis). I’ve divided her learning into three broad categories of beginner, serious student, and mastery. A few points to think about:

Knowing what good is

This chart shows something entirely different: your understanding and perception of skill in a field. For instance, the beginning musician is likely to be dazzled by anyone who can play a lot of notes fast. He doesn’t understand subtlety or style, and probably can’t even tell the difference between something played well or not so well. As our learner digs deeper, he starts to get some wisdom. He starts to understand what good (in his field) really is, and begins to understand the difference between really good and great.

So this is our understanding of skill, which is something different from skill itself. What happens if we consider both of these curves together on the same chart?

Perception of our own skill 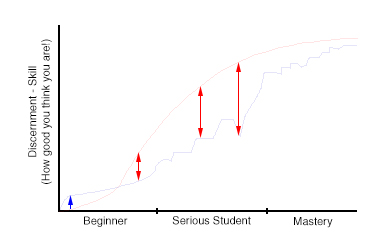 Here’s where things get interesting. In the chart above, I’ve put both of our lines, but I’ve also highlighted the difference between them. This is important: your understanding of your own skill (self-skill) depends on your general perception of skill in the field! For the beginner, who we just said knows very little, his own early skill seems very impressive indeed. Very often the “honeymoon” period in which he gains some new skills happens before he really understands very much. Realistically, he doesn’t have great skills, but he also doesn’t know enough to know this!

In the intermediate stages, which is where the foundation of mastery lies, things get a lot messier and a lot more complicated. Skill development often plateaus while discernment does not. If this is hard to understand, imagine that you are practicing, but are stuck in a long plateau stage in which your skills don’t really grow. (Remember, this is normal for most fields.) However, what if you’re continuing to develop more discernment and refining your perception during this period? You will very likely have the sense that you are actually getting worse, because your impression of self-skill is based on this difference. (Heaven forbid we have an actual minor setback in skill in this emotionally-charged environment—this can feel like the end of the world!)

For the master, things start to get more realistic as perception and skills come into alignment, but this is many years down the road in most fields, if not decades.

What to do with this?

This is an idea I’ve been trying to articulate for a long time. You may disagree with the specifics of the charts above, but I do think the concept is sound: we often increase our understanding and perception of skill in a task faster than our own skill can develop. I can’t put it more simply than this: this feels bad. Really bad. This is one reason why many people quit.

Forewarned is forearmed. If you know that this will likely happen, that you will hit plateaus and they’ll feel worse than they are, that you may feel stuck at a level for months (or even years), you’ll be prepared for it. You’ll understand that it is a normal part of skill development, and, most important, you will not quit. The path to mastery is difficult at best, but our perception of our own skill can shape the emotional context and lead to our eventual success or failure.

Does anyone really succeed at trading?

How to think about your trading decisions

The dark side of technical analysis