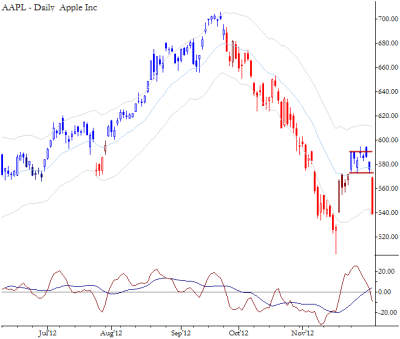 Markets operate in two basic modes: mean reversion, in which large moves are quickly reversed, and range expansion, in which large moves lead to further moves in the same direction. Different asset classes tend toward one mode or the other (that’s something that is not acknowledged enough in the technical analysis literature), and stocks tend strongly toward mean reversion. In other words, all other things being equal, large moves in stocks tend to be reversed. You can buy dips and short spikes, though the actual application is a bit more complicated than that.

One of the most powerful things technical analysis can do is to set the context for market moves and to attempt to quantify the most likely emerging volatility environment. I said, “all other things being equal, large moves in stocks tend to be reversed”, but all other things are not equal. In this case, this large selloff comes after a period of consolidation (volatility contraction) which set the stage for a directional move. Under these conditions, there is more likely to be further downside than a quick reversal. In other words, the bears are probably fully in control of this broken market leader, and look out below.

How you trade this pattern is another question, and there are a few answers. At this point, understand the context, and keep this point firmly in mind: we’ve only identified a pattern that provides a slight tilt to the probabilities. This is all that is possible. We deal in probabilities, not certainties, and any of a thousand things can cause a pattern to fail. Even though this pattern points down, can Apple explode into a rally? Sure, anything is possible, and your risk management plan must have contingencies for every possibility. Do not be surprised and caught off guard when a market does something other than what you expect.

The dark side of technical analysis