[dc]T[/dc]oday I want to continue from last week’s post on Fibonacci ratios, and wrap up with a few thoughts and conclusions. That post was very heavy on data and charts, but the conclusion is pretty simple: at least in this sample of market data, using this particularly specification for swings, we find no evidence that Fibonacci ratios are significant in the market. A few questions flow logically from this statement: why so many qualifications (in this sample…)? Why are Fibonacci ratios so commonly used in technical analysis? What could we have missed with these tests?

Taking these in order, the reason there so many qualifications to my statement is that any test of market data is only valid for that particular sample. Of course, we spend a lot of time and energy thinking about how to create that sample so that the results will generalize to other market data. That’s the whole point of any analysis, but maybe we are wrong in assuming the results will generalize. In this case, I took a very large sample of markets from different asset classes over a fairly long time period that encompassed many “types” (regimes) of markets. I think this is a representative sample of all market action, but, again, maybe I’m wrong. I looked at daily data. Perhaps I needed to do weekly or monthly or hourly or some other interval. (For what it’s worth, I have reproduced much of this work on other timeframes and other time periods and found that the results were substantially the same.) Also, any test we do is a joint test of both the underlying market tendency we are trying to capture and our particular specification of that tendency. This is important to remember. Maybe I should have defined the swings differently; there are probably a few hundred other ideas and ways we could think of to do this. I did quite a few of those (again, not presenting the results here), but we can never say we have definitive proof or disproof if we are thinking in a scientifically correct way. However, the statement we can make, that we find no evidence of Fibonacci ratios being structurally significant in the market after a large battery of tests, is elegant and, to casual ears, maybe understated, but, for an objective analyst, it is as subtle as a cannon shot. It is condemnation of the idea of using these ratios in trading, so we need to ask why they are so commonly used. 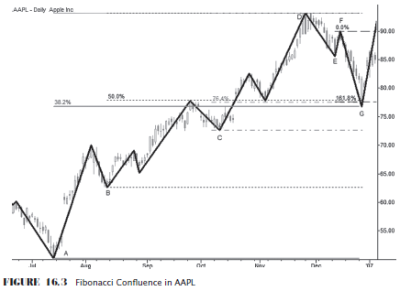 Here, I’m speculating. I don’t really know, but I think there a few answers. Much of technical analysis borders on superstition, and people accept old ideas as somehow descending from authority. People like mystery and intrigue, and I think the idea that your trading system somehow rests on the harmonic convergence of the Sacred Geometry of the Pillars of the Universe (that phrase probably needed some more capital letters) appeals to a certain mindset—people will overlook the aberrations of the Gann/Elliot/Fibonacci crowd. Books like the DaVinci Code appeal on a deep level, and trading systems based on mystical concepts are hard to test and also immediately appealing. Vague claims abound since most of the gurus of these methodologies are long dead; Alexander Elder recounts an interview with W.D. Gann’s son in which he disclosed his father’s complete inability to make profits trading, but many websites and books still list Gann as the “most profitable trader ever. Ever.” Let’s face it, these ideas are sexy, and it is very easy to sell a newsletter trumpeting these concepts, even if they have no objective utility. There is also something reassuring about being able to forecast exact turning points to the tick, even if there is no validity to those forecasts. If you make enough predictions, some of them will work out just by chance, and that’s all you need to embed a pretty deep cognitive bias. Profitable trading may seem just out grasp, but you “know” the method is good because you can remember some great forecasts. Something must be wrong with your psychology or money management, so attention is focused there while the real problem—the fact that the underlying methodology may not have an edge—goes largely unexamined.

There is also another influence, and this is that people are unable to subjectively evaluate the significant of any level or line in the marketplace. (Watch this video, and track those levels over the past years for an interesting insight.) This is not meant to be insulting to anyone—it’s simply a function of the way our brains see patterns in random data. Any line drawn on any chart at any time will most likely be significant. Put several retracement ratios and confluences from different swings and different timeframes on a chart, and you have a “can’t miss” system. Your eye is virtually guaranteed to find significance. This is perhaps why so many people defend these levels, but the real question is, say, for instance, you enter trades at the 38% retracement and place your stop beyond the 62% retracement, does that work? Does that work better than putting your stop or entry someplace else? I’ve never seen a well constructed test that suggests that it does for any trading system.

Some people will suggest that Fibonacci analysis is an art and that it’s wrong to subject it to actual analysis. They’re at least half right: I think that market analysis always includes a significant element of art, but we still should quantify everything we can. It’s hard to accept that these ratios are both extremely important and invisible to quantitative tests. If we can’t tease them out of the data with statistical analysis, maybe they aren’t there? I think the real answer to the art challenge is that we don’t need these ratios to do excellent analysis. There’s no proof they add anything to our thinking.

That is perhaps the most significant point, at least to my thinking. Occam’s razor applies here: the simplest theory with the greatest explanatory power is probably the best answer. I live in world in which I believe that market prices are driven by the simple interaction of the desires of human participants to buy and sell assets, whether through direct action or proxy. (A computer program encoding elements of market behavior into an algorithm is a proxy. It is still a concept driven by human cognition and analysis, and a human can always make a decision to stop the algorithm from trading if market conditions change.) That’s a pretty simple construct—everything you see in the market is a result of the interaction of those convictions, the underlying behavioral patterns and cognitive quirks of humanity, expressed, in the end, in market prices. I do not need a code that is derived from counting the letters in the King James translation of the Bible. I do not need mysterious ratios or arcane wave theories to explain, and to predict within the statistical bounds of what probability, the future path of price and/or volatility.

So, that is why I personally do not use any retracement or extension ratios in my analysis or trading. It wasn’t always like this; I still have some very cool spreadsheets for calculating ratios and confluences, created in my salad days (“when I was green in judgment…”) before I learned to apply basic statistical reasoning to market action. If you do use these ratios, I would challenge you to think deeply. Perhaps I have missed something significant, or perhaps I am merely completely wrong in my analysis, but one thing should be clear—the burden of proof should lie on the people offering arcane and complex methodologies, when simpler methods work just as well or better in the marketplace. If Fibonacci ratios are the key to the markets, where are the quantitative tests? Where’s the proof?