Let’s cut straight to the punchline: the answer is, “it turns out, quite a lot.” Continuing on this week’s series that attempts to break down important technical trading ideas into easily digestible pieces for everyone, let’s take a look at probability and luck, and the part they play in our investing results.

People selling investment tools or advice are, in some sense, selling an illusion of certainty. We can use whatever words we like–consistency, security, risk management–but what it comes down to is that humans have a very natural desire for safety and security. We want to know what the right actions are, and that those actions will lead to the desired results. We think we are prepared, and that we can handle some variability. For instance, in cooking a steak, we might know that sometimes the piece of meat will be tougher, more flavorful, or have a little better fat marbling–so we know that the steak we cook tonight will not be identical to the one we cooked last week.  But what if we cut the meat, get the grill to just the right temperature, season the meat perfectly, start to sear it, and then our house gets hit by a small asteroid that wipes out our entire town? That’s a degree of variability we, generally, are not expecting. Though the example becomes a little silly (and the steak is overcooked), surprises like this happen in financial markets far more often than we’d like to admit.

Randomness is a problem for traders and investors. It’s a problem objectively because it makes our results highly variable (even if we’re doing exactly the right thing), and it’s a problem subjectively because we (humans, all of us) have very poor intuition about randomness. Looking at any market, most of the time, most of what you see is random fluctuation–meaningless noise. We don’t deal well with meaningless noise; our brains are fantastic pattern recognition machines; they find patterns with ease, even when no patterns exist. Many pages have been written about cognitive biases in investing, but one of the most serious is that we don’t understand randomness intuitively very well. Consider these questions:

You probably get the point that, unless you’ve studied probability and statistics, your first answers to those questions are probably dramatically wrong.

So now let’s think about the market. Market data is highly (but not completely) random, and our interactions with the market will unavoidably pick up some of that randomness. For example, take a look at the chart below, which shows theoretical results for 50 traders each taking 250 trades of the same trading system. (Each separate line represents an individual, theoretical trader.) The system had a positive expectancy, and none of these traders made any mistakes, so they all “should have” made money. Look what happened: 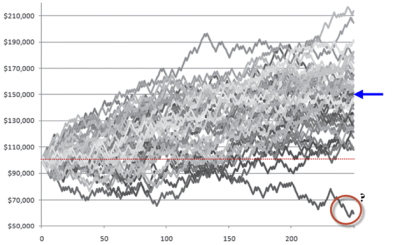 This is a crowded graph that is pretty hard to read, but the lesson is simple. The blue arrow shows what the expected value of the system actually was, but look how far spread out the ending values are. Also, notice that many of the lines were under the dotted red line (the starting value) for a long time, showing that many of these traders had losses that lasted for over 100 trades! Furthermore, one trader actually ended the run losing a significant amount of money. (If you want to read more about this example, it’s drawn from my book (pp 270 ff), or you can read more in this post.)

Few traders are prepared for this degree of randomness in their results, and, yes, let’s use that dirty word: some traders get lucky and some get very unlucky. Even though each of the traders in that example above were trading a positive expectancy system, many of them probably would’ve pulled the plug early on, and imagine the psychological stress some of the “losing traders” felt! One poor trader was never above his starting point, while he had to watch a friend double his money using the same system. This example is powerful because we’ve removed everything except luck from the equation. There were no mistakes, no emotions, no analytical prowess, no tweaking of the system; the traders simply, perfectly, blindly took each trade as it came along, each trade result was independent of the result that came before it (i.e., was random), and the divergence in their results is due to one factor only: luck.

So, that’s great, right? Some people get lucky in the market and some don’t. If that’s all I have to say, maybe we should just go to Vegas and put it all on black for the first roll, but hold on, there’s a better way. In my next post I’ll take this a step further and share some observations about how you can manage luck and uncertainty in the markets. There are some good lessons here, no matter how you trade or invest.

Life hacks and learning to trade