Continuing from yesterday’s post, I wanted to dig a little bit deeper into the idea of what happens when markets go too far, too fast and snap back. This concept is called overbought/oversold in the traditional technical literature, and it is one of the most important elements of market behavior. A little nuance is required to make good use of this, though. Let’s look at three points today:

What does overbought mean?

The core concept here is that markets move in more or less predictable waves of buying and selling pressure. When a market is trending upwards, we usually see strong with-trend thrusts, alternating with consolidations or pauses, and vice versa in downtrends. (By the way, those two sentences generate nearly all of technical analysis–all of the wave schools, ratios, chart patterns, and much of the conventional wisdom comes from that: the most fundamental way markets move.) What actually moves markets higher? Though we could debate that point endlessly, I would suggest that it is people buying, which generally means people switching their bias to being long from being neutral or bearish. People with money in reserve have to decide to buy now to drive the market higher.

Sometimes this pattern gets short circuited and people seem to buy in a panic. Why is this bad? Because, in some sense, “everyone who wants to buy has already bought”. there is no source of new buying pressure, and the market collapses into the natural vacuum. This happens on all timeframes from very short-term intraday, to very long term; when it happens in the long-term, we call it a bubble (and write stories about how it has never happened before, though it happens several times each decade!)

This is the concept of an overbought market: a market where “too strong” buying pressure has pushed the market to an extreme, and it is vulnerable to a reversal. The question is how to find those markets, and there are a few tools that are useful.

How to find overbought / oversold markets

There are a number of tools that can help in this regard. One of the most useful is properly calibrated channels. Personally, I use Keltner channels, but Bollinger bands are more common and show a similar edge. (Here are some stats for Keltners.) There are also a number of indicators that can help identify these areas, but be careful. Much of what is written about indicators is misleading or absolutely false, and many experts have never subjected their methods to tests. If you do want to use an indicator, RSI shows a statistical edge in many cases and might be worthy of consideration.

With some experience, it is also possible to get a sense of what these overextended markets look like. Yes, I realize that is potentially unsatisfying and seems to confuse the issue, but we’re talking weeks or a few months experience rather than years. If you are interested in pursuing this, some time studying chart action (ideally, with bands or channels on the chart) will give you a good idea of what to look for.

How to use this concept and what can go wrong?

So, we have some ideas about how to find overbought and oversold markets. Let’s consider the biggest danger, which is that overbought does not always work like you think it might. The term implies that a market is due for reversal, but consider a very strong market–we can find example after example of “overbought” markets that continued to go higher, becoming more “overbought” at every turn. This is not a problem if you understand that everything we do or even think about markets must be in the context of probabilities, but if you think that an overbought market must reverse, you are walking on thin ice. Be ruthless when it comes to refining your thinking.

The purpose of this little series of articles is to bring technical ideas to non-technicians, and to give you things to use that don’t require a lot of study. Specialists (technical traders) sometimes incorporate the idea of overbought / oversold into their work as trade triggers (e.g., fading (going against) very strong or very weak markets) or they sometimes use these areas to take profits. In my published research, we publish several models and screens that give entry levels and profit-taking points for stocks based on these concept.

However, the 80/20 rule applies, and you can get a lot of mileage out of a very simple rule: just don’t enter trades when a market might be overbought or oversold. (Following this simple rule will also force to you trade pullbacks, which is very good trading practice anyway!) Here are two charts that show you one way to apply this concept. On these charts, I have Keltner channels (set 2.25 ATRs around a 20 period EMA) and a 14 period RSI, though you can apply similar ideas to many different tools. Simply skipping entries when a market is outside the band will put you a little bit ahead of the game, and, in a very competitive game, a little edge can make a big difference. 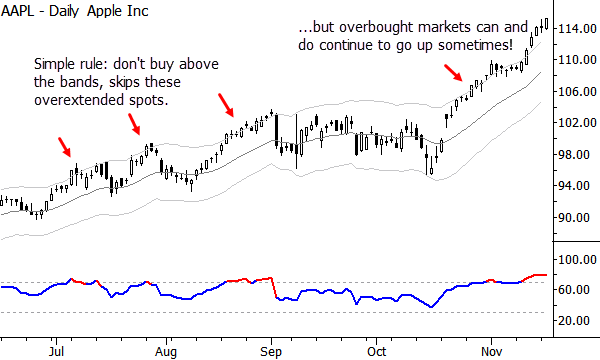 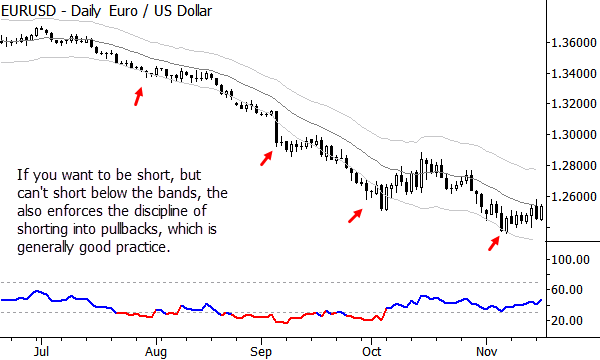 Reader question: why write down prices or chart by hand?