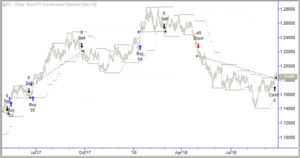 Trade management is at least as important as trade entry, and maybe a lot more important. There are two main tools for trading management: profit targets and stops. From these two simple tools, complexities explode because there are many choices—where do we put them initially? Do we move them? When and how much? Ever cancel them? Any other possibilities, such as a time stop? If we exit, do we ever add back? Do we consider other positions/correlation?

Before you trade, you should have a pretty solid answer to most of these questions. This is part of developing your trading plan, and it’s a major focus in my free trading course. (If you haven’t seen the course, you really should check it out. Registration is required, but it is completely, totally free.)

Let’s narrow the scope today and focus on trailing stops. These are stops that are moved as the trade develops. Knowing when and how to move them is a key part of trade management. Here are some ideas:

Slide along the bands: a trend pattern you should know