I want to share a trade with you that I recent published in my Talon research report. There are a few lessons here: first, the enduring lesson of trading pullbacks in ongoing trends. Second, dealing with the concept of “maybe oversold”. And third, the importance of targets and stops for swing traders. 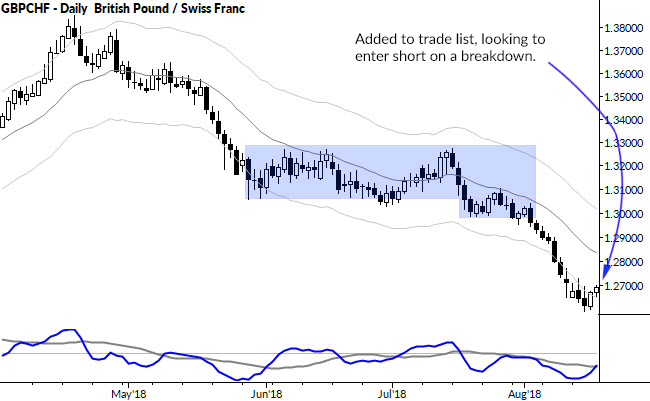 The chart above shows the GBPCHF the day it was added to my list as a potential sell. We were looking to enter a short position on a breakdown, so, ideally, the trigger could be as simple as entering below yesterday’s low.

Now, many of you might argue this market was oversold/climactic, and it’s easy to find indicator readings that would support such an assertion. To my thinking, there’s a difference between an ongoing trend that becomes climactic, or a market that makes a gigantic move on a first break. I judged that the GBPCHF had been in consolidation since late May, and that the July/August breakdown was the first real momentum out of that move. In that case, I’m willing to sell a breakdown of the first consolidation out of that move, providing the consolidation doesn’t generate a lot of upside momentum. 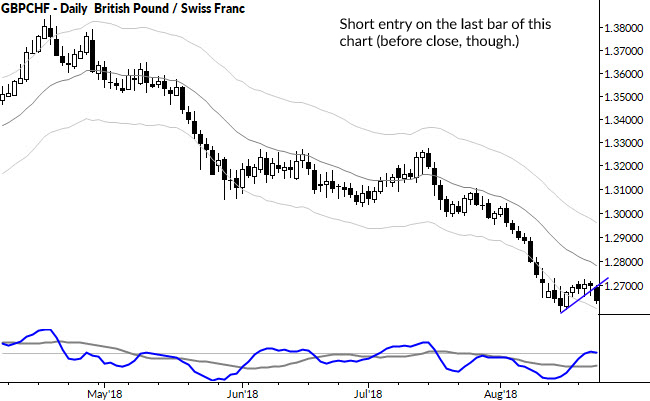 Sometimes we have to stalk these entries a while. Along the way, we’re watching for momentum that would contradict the trade, but, as long as the upward drift is controlled, it looks much more like a consolidation in a downtrend than a trend reversal.

Our entry came on the bar in the chart above, entering on a break of the trendline or using a previous day’s low for an entry. (The choice of entry technique is personal, and should be a part of your trading system you give a lot of thought to.) 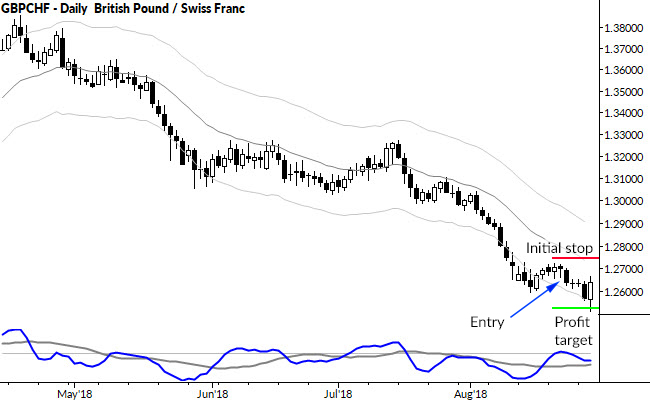 Now, I’d argue this is a trade that didn’t really ‘work’. We talk about effective trade and risk management, but so often that’s an abstract concept. What does risk management really mean? How does trade management work?

Here’s a concrete example. In the penultimate bar on the chart, we closed with about +0.8R profit in the trade. As a matter of course, I work first targets at 1R. Always. Without exception. Again, you can adapt this for your own work, and as you can see from this trade record, you might even be better off exiting the whole trade at 1R! Now, as a swing trader, I’m not interested in giving back a lot of money, even in a relatively small swing. My job is to take as much of a clean swing out of the market as I can, so I tightened the stop to the entry price. My expectation was that we’d hit the profit target, and maybe continue lower, but that’s not what happened. We did trade through the profit target (cue cash register sound), but then the market reversed strongly and hit our stop at the entry price. The net result, assuming equal size on both exits, was 0.5R (and score another win for the full exit at profit target plan!)

The lessons here are that trade outcomes are highly uncertain. Though swing trader is largely “hands off”, you have to be ready to take action when that action is needed. You should have targets in place at all times. You should have stops (whether in the market, held, or mental) working at all times. Never take anything for granted, and above all—follow your trading plan. Have a clear plan, and follow the plan.

If you want to see more trades like this, I invite you to check out my work with Talon. All subscriptions begin with a no-risk trial, and are fully refundable within the first month after the trial. No risk, 100% money back guarantee. Start your trial today.

What Do You Believe?