Everyone is talking about the recent underperformance of small caps (and I’ve talked about it too!) This underperformance is taken to be a sign of an impending crash, or at least a sign that the market cannot rally. This might be a mistake, as a look at some longer history shows.

Small caps probably actually are a good gauge of investor risk appetite, and many of the rallies of the past decade have been led by small and mid cap strength. However, the market does not have to have the leadership of these smaller names. In fact, there have been plenty of times in history that smaller caps have held together better on declines, and small caps were weak for most of the 1990’s. The relationship between market rallies and small caps may not quite be what people think it is:

Point 1: Small caps do not have to lead market rallies, and, historically, they have not always done so.

Taking a look at more recent data, small caps have indeed lost some ground against their larger cap cousins this year. (We don’t need yet another chart here showing that this is true!) You could make the argument that the market has been in broad consolidation for all of 2014, despite momentary highs in some indexes. Sector (and geographical, and market cap) rotation is normal in consolidation.

Last, this is an interesting technical structure that pretty much speaks for itself, if you are familiar with the failure test, and Wyckoff springs. It is very easy to get myopically focused on daily charts (or intraday), but it pays to step out to the weeklies to see what is going on there. Yes it’s a little too early to call it, but this definitely demands some attention: 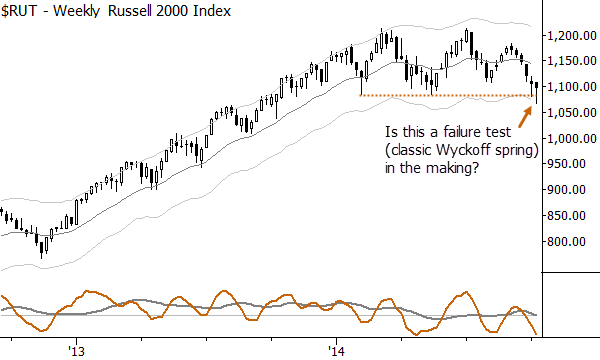 Pullbacks are healthy. The shifts in sentiment can be jarring, but you have to stand back and see them for what they are. Yes, the market may well decline 20% from here, but probabilities do not favor that at this time. Every sign we see points to this being a pullback, and, in pullbacks, we look for reasonable places to put on risk. One scenario I could envision would be small caps taking off from here, that spring in the chart above marking the low, and a strong 2-3 week rally in small caps putting them back in the position of leadership. (There are, obviously, other scenarios, like the S&P 500 selling off 80 handles tomorrow!)

Having scenarios like this in mind–call them what you will: templates, roadmaps, possibilities–can be helpful, but we must guard against letting them become biases because those can blind us. Be flexible; be responsive. Have the map, know what should happen and should not happen, and then monitor the market to see what actually unfolds. Do all that while managing your risk, and you’ll be just fine.

Evaluating a trade edge: is it good or not?

Chart of the Day: Bear Flag in EURUSD