So, in doing my weekend work, I found what looks like a decent long trade in NYSE: STT. There are a number of supporting factors on this chart, but it is essentially a breakout trade supported by consolidation below the level and higher lows into resistance: 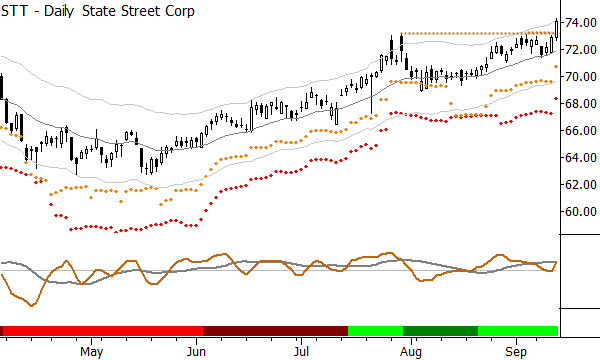 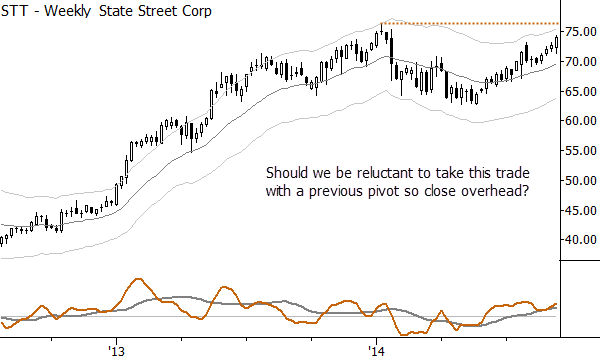 This analysis is very common, and traders even figure their risk/reward ratio. For instance, one of the arguments for trying to catch reversals is that you have so much more reward for unit of risk. This thinking is supported with a chart like this: 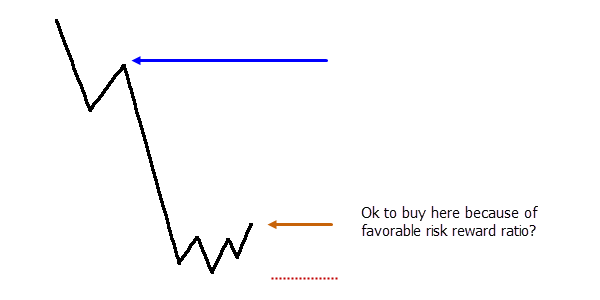 So, my question, to start the week, is: is this true? Take the last chart, for instance, and let’s just put numbers on it: Assume you are buying at 10, your stop would be underneath at 9, and that blue arrow (your target) is at 15. I think the error that traditional technical analysis makes is assuming that the outcomes are equally likely, or nearly equally likely. If so, this is a trade with a fantastic 5:1 reward:risk ((in technical analysis, it’s very common to say “risk/reward” when you actually mean “reward/risk”. Are we truly looking for trades with a “high risk/reward ratio?”)) ratio. Traders like trades like this, and you will often hear something like “I can be wrong five times and only have to be right once to make money with a risk/reward ratio like that.” The flaw in the logic is that, in the absence of some other factor, you will be wrong five times and right once with a reward/risk ratio like that.

Assume that prices move according to a random walk, just for a moment. (I’m not saying they do, but assume so.) It is pretty easy to see that the win ratio “automatically” adjusts for the size of the reward/risk ratio to maintain a zero expected value because there is no edge possible in random walk markets. That was a profound revelation to me when I really integrated it into my thinking, an if it’s not immediately apparent to you, play with the idea until it is. If your profit target and stop are the same unit away from the entry price (1:1) then you win ratio will be 50%, which is a zero expected value. ((Note that it must be zero because there is no free lunch. It can’t be negative, because that is also an edge and we could take the other side of the trade.)) In the case above, with a 5:1 reward:risk ratio, the win% will adjust to 16.7% to maintain the zero expected value. The answer to “I can be wrong five times out of six and break even” is simple: yes, you will be wrong five times out of six (in the absence of some other supporting factor).

The point here is that finding excellent reward/risk ratio trades is not, in itself, an edge. It cannot be because it would violate fundamental assumptions of logic and fairness in financial markets. The only way the chart analysis I led with makes sense is, in the last chart, if the market is somewhat more likely to move up than down, if there is some kind of “clear air” generated by the swing structure–in other words, if markets do not follow random price paths after patterns like that set up. So, my (genuine) question to my readers is two part: is there some motivation for the trade outlined on that third chart, and, more importantly, how do we know it’s true? We need to be aware of the power of the mind to create patterns where none exist, and it’s also good to have a reminder of how convincing random support and resistance levels can be, so we need to be careful of subjective analysis. “It works because you can just see it works” is not an acceptable answer. We have to dig deeper.

This is a question that strikes right to the heart of much of our thinking about charts, trading, and technical analysis. I do not have an easy answer for this question, but it is an important question that any technically-motivated trader should ask. How do we know this works? How can we know that? How sure are we? Asking questions like this, addressing whether your methodology has an edge, is the first step in responsible risk management.

Reader question: What is the most important chart pattern?

What’s luck got to do with it?

About those small and mid caps…