FOMO (fear of missing out) is a killer in the markets. One of the surest ways to lose money is to miss a trade, get frustrated, and then bang into a bunch of bad trades trying to make up for your miss. These emotions lead to many mistakes.

This is why we often advise traders not to take multiple trades in the same direction. In other words, if you see two or three good shorts and don’t take them, you probably shouldn’t take the next short that shows up. If you took the three good shorts, you should be highly suspicious of the fourth. If you missed them, then you should be highly suspicious of yourself. Either way, take the next trade is dangerous.

This is solid advice because it protects the trader from himself and also from choppy markets that are prone to reverse. But how and when do we break this rule? Take a look at the recent chart of crude oil futures: 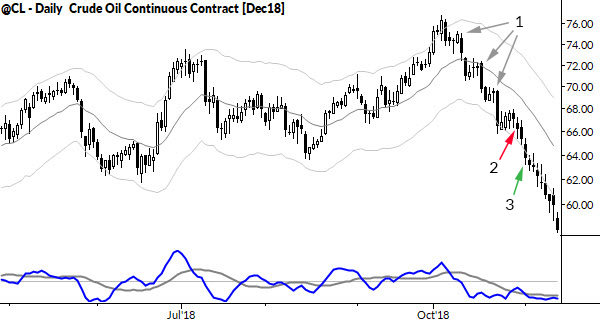 In 2018, I had several short trades, but none of them worked out very well, and I read the price action of recent months as confirming the longer-term bullish bias. Under those conditions, I know I will be a little slow to get a hint of a trend change to downtrend. That’s a tradeoff I happily accept, because it works out for me, more often than not.

However, I saw that I had missed three short trades. (Marked “1” on the chart above.) I wasn’t asleep at the wheel–I saw them in real time and elected to pass on them because of the longer term bullish bias. My thought process ran something like this:

That analysis unfolded over the course of a month, which is one challenging thing about swing trading–sometimes we deliberately have to be slow-moving.

Now… we set up a trade entry before “2”, and we took it. (Self-promotional plug: this trade with exact entry, stop, and trade management parameters updated daily, was available to every one of my clients: from Talon to MarketLife Premium and Plus.) Regardless of the outcome, I would argue that this was a valid trade entry and was not chasing. (In fact, in my daily MarketLife video where we discussed the trade entry, I said I would write this blog! This is not after-the-fact analysis. (And #3 is where we took partial profits on the trade.))

If chasing is so bad–and it is–why was it ok to take the fourth trade entry in the same direction after passing on three that worked out well?

In this case, the dominant factor was the breakdown of the higher timeframe trend. I had no way to know if that is what would happen, but the type of persistent selling pressure we saw on the daily chart was inconsistent with a strong trend on the weekly. Another way to say this is that these daily patterns are typical of the kinds of lower timeframe patterns than break trends.

There was also a secondary factor, which is that the market was not extended: This trade came just after the first time we had touched the lower Keltner Channel in many months. Had we been extended below the channel, I think the odds on this trade would have been much lower and the risk much higher. It still might have made sense given the potential higher timeframe trend shift, but it would not have been such a clean setup.

There are two lessons I hope you take away from this blog: first, don’t chase trades. We didn’t focus on that, but it’s hard to overstate or to exaggerate how bad this can be for your bottom line.

Second, watch for lower timeframe structures that occur within potential trend changes on higher timeframes. These are not at all sure things, but you’ll get some extra momentum if the higher timeframe trend does break down. There might be some other markets showing potential for these kinds of trades: grains? precious metals? bond futures? stock indexes? Let’s see what the next few months bring us.