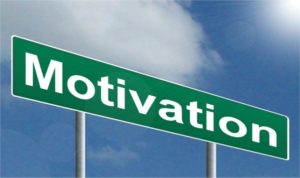 It’s that time of the year again: resolutions are made, gym memberships bought, diet plans laid out, major projects are started—the whole time, everyone knowing that all these plans are doomed for failure. Why do we fail so consistently on these New Year’s resolutions that it has become a cultural joke? Because we don’t account for motivation.

Motivation is a resource

Motivation is a precious resource. With it, the sky’s the limit—we can accomplish superhuman tasks and overcome nearly any obstacle. Without it, we sit on the sofa and watch daytime TV. Motivation is the essential fuel for action, and action is what separates those who achieve from everyone else.

It’s too easy to blame failure on lack of followthrough and determination; it’s too easy to say that we quit and gave up when we should have pressed on. In many cases, the failure to act is a symptom not a cause—a symptom of failed motivation. We need to focus attention on understanding and shepherding our finite, precious motivation.

In my experience, both the short and long term views are important. When we talk about motivation, we usually think first of having a vision of success and knowing where we are going. Yes, this is important (perhaps essential), but I don’t think it’s enough. To maintain motivation, we also need to love the small stuff and respect the power of routine and habit.

Vision does matter; without a good vision of where and how we want to end up, it’s hard to accomplish much. A good vision is a shining beacon set somewhere in our future, and a powerful vision draws us to that place. A vision need not even be realistic or completely attainable to have power to shape our actions. A vision may be a moving target, and certainly may be subject to revision.

Though self-help books are filled with stories of people who set impossible visions and achieved them, this may not be the best plan. Imagine someone who sets a goal of being a pop music star and then sticks to that despite all evidence that this plan is not going to work ou; this person probably left many opportunities for fulfilling and profitable career choices fall to the wayside, and will likely end up with an empty, unrealized dream—a fantasy. There’s a careful balance here because it does make sense to have some stubborn dreams, but the dream itself is not the goal. (To reword: the goal is not the goal. Are we Zen enough yet?)

The Vision, the Dream, is the magnet that pulls us forward, so think carefully about where you want to put that magnet. However, the Dream is not enough. All the wishful thinking in the world is not going to make your dreams come true. Walking toward that goal, taking the action of small steps—that’s what works.

Though Dreams, vision boards, and big picture planning get most of the attention, it’s the things you do that will actually move you toward that dream. Making these little things into habits is the key, and that’s something I’m going to be writing about over the next few weeks. Today, let me just paint the big picture:

The key to maintaining motivation is working on both of these fronts. Have a big picture goal, a vision, a dream, of where you want to be. Without that, we’re lose. But focus even more on the small tasks and things that will move you closer to that goal. Build them into habits and come to love the routine of those habits. When you love what you’re doing, it’s much easier to keep doing it. When you’re doing the right things and loving them, you’re going to be amazed at what you can accomplish.

Adam on the MoneyLife show

Steps along the journey