This is repost of an article I wrote last year (2012). I would have updated the numbers, but it wasn’t really necessary as last December was flat enough that it did not materially alter the stats. This is the time of the year when we will start hearing more and more calls for the “Santa Clause” rally, so it’s important to understand what the numbers really say. Is there a Santa Clause? Have we “been affected by the skepticism of a skeptical age”? Does he bring rallies to the stock market in December? Let’s find out:

[dc]I[/dc]t’s nearly impossible to go a day in December without hearing the phrase “Santa Claus rally.” There is an impression that the market tends to rally into the end of the year, and that we can count on that. Many explanations have been proposed, ranging from managers marking their books to holiday goodwill to more quantitative reasons. In an earlier post, I made the arguments that the market was not a math problem, and that you don’t have to use a lot of advanced math to understand the markets. This is true, but math is a powerful tool. Used properly, it can help us see what is real in the market. To illustrate this point, let’s look at the Santa Claus rally, and ask two questions: First, is it real? Meaning, does the market really tend to go up into the end of the year? Second, if it is real, how has it performed over time? If we find something that has persisted for many years and appears to be stable, it’s probably much more likely to work this year.

To run this test, I used about 90 years of the Dow Jones Industrial Average because of the long data history. It is a reasonably good, but not great, proxy for the broad market—good enough for this purpose. I first took daily closes, then converted them to percent returns. Since daily returns tend to be small, I went one more step and converted them to basis points, just because it is easier to deal with a number like 2 than .0002. (A basis point is one one hundredth of a percent, so 1% = 100 bp, 0.1% = 10bp, etc.) Let’s work first of all with recent data. Here are some summary stats for all daily returns:

Be sure we understand what this table is telling us: There have been 3,019 trading days with an average daily return of 1 basis point (=.01%). The worst day was -7.87%, and the best day saw the market go up a little over 11% on that day. The important thing here is to understand the thought process: we need to know what “all” days look like as a control group, so we can contrast them with the days that have the specific condition we are interested in. In this case, let’s compare them to trading days in December, since that’s when Santa comes.

Now, this is getting interesting. December shows an average return almost seven times the average of all days in the year. Another thing to notice is that the standard deviation, which is a measure of how widely spread out values are, is smaller (though let’s not focus on the standard deviation for this post.) Not only are the daily returns larger, but we seem to know where they will be with more certainty (if this dataset shows tendencies that continue into the future.) Conventional wisdom (and seasonal analysis) tells us that volatility tends to contract into the end of the year; this table seems to support that. Let’s dig just a bit deeper, and look at what happens if we break out the last two weeks and the last week of the year separately.

Maybe we are a little bit less impressed here, but the effect does appear to hold. (Also not shown in this table is the closing print for the year has been higher than the open of the previous 4 weeks 75% of the time.) So, yes, Virginia, there is a Santa Claus rally, but wait… we are not done yet. Take a look at the following table, which reproduces this table in roughly 2 decade segments. 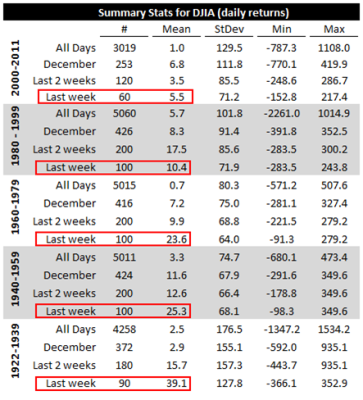 Now we start to see a clear pattern, and the truth is ugly for the Santa Claus rally. Each segment shows a weaker and weaker effect—the last week of the year, which since 2000 has yielded an average daily return of 0.05%, gave a 0.25% return in 1940-1959, and a whopping 0.4% (per day) in 1922-1939. By comparison, today’s effect is anemic. Probably the best way to put this is, “Yes, Virginia, there has been a Santa Claus, and if you were a good investor he probably brought you money. He probably even did this for decades and decades, but he seems to be getting tired, and I’m not sure we can count on him showing up next year, or the year after that. If we hang our hopes on Santa Claus in the market, it seems like we might be frustrated. There must be a better way.”

(This is one way to investigate some elements of seasonality–one of the many topics we will cover in my trading course. This course is and will always be completely free, so check it out if you haven’t already!)

Life hacks and learning to trade