This is a slightly edited version of the note I sent to my Talon Advisors clients this weekend.

There is always a lot of discussion about seasonality at the end of the year. This is a troublesome topic—on one hand, there are reasons why seasonality should work: portfolio managers square up at the end of the year, selling for tax purposes, etc. There are also armies of people waving statistics around, and many people who believe, with almost religious fervor, that seasonality matters, and some will even tell you it’s the most important thing.

On the other hand, well, are the cold hard facts. The statistics show, quite clearly, that seasonality is, at best, a very slight influence on price direction. In most cases, seasonality is almost entirely swamped by natural noise and variation.

Rather than dismissing seasonality out of hand, we will touch on some of the more common seasonal influences over the next few weeks. This week, let’s begin with what edge might or might not lie around Thanksgiving.

Establishing the date of Thanksgiving historically is not trivial. From the National Archives:

On September 28, 1789, just before leaving for recess, the first Federal Congress passed a resolution asking that the President of the United States recommend to the nation a day of thanksgiving… It wasn’t until President Abraham Lincoln’s 1863 Proclamation that Thanksgiving was regularly commemorated each year on the last Thursday of November.

To end the confusion, … on October 6, 1941, the House passed a joint resolution declaring the last Thursday in November to be the legal Thanksgiving Day. The Senate, however, amended the resolution establishing the holiday as the fourth Thursday, which would take into account those years when November has five Thursdays… President Roosevelt signed the resolution on December 26, 1941, thus establishing the fourth Thursday in November as the Federal Thanksgiving Day holiday.

This is important if we want to look at historical data–we have to be sure we are looking at the right dates!

It is commonly assumed that the days around Thanksgiving have a positive directional bias. The table below shows the excess daily return (annualized in the second column) for the Monday, Tuesday, and Wednesday preceding Thanksgiving for the DJIA. The Annualized column shows what that daily excess return would be annualized. The fourth column is a standard significance test and the last column shows the percentage of days that closed up for that decade, within the three day window. (For reference, 52.1% of days in the entire sample closed up.) 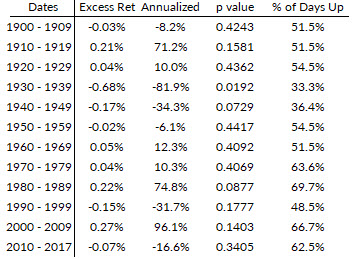 We can see that there appears to be no stable seasonal tendency for the days before Thanksgiving. Recent decades have seen a disproportionate number of those days positive, but the magnitudes of the changes have been small in the past seven years. Anecdotally, we observe that Thanksgiving was often strongly positive when the market was under extreme bear market stress. (2018 does not qualify.)

The day following Thanksgiving (not shown in table above) was strongly positive in 1950-1980. (Was positive approximately 85% of the time, with large and statistically significant excess returns.) Since 1980 this day has also degenerated into a coin flip, with no apparent edge.

Examining over 100 years of daily returns for major US indexes, we find that there is no clear and stable statistical tendency in the days before and after the Thanksgiving holiday.

If you’d like to see more work like this, and how we apply quantitative statistical tools to longer-term investing and swing trading, check out my work at Talon with a no-risk, free trial.