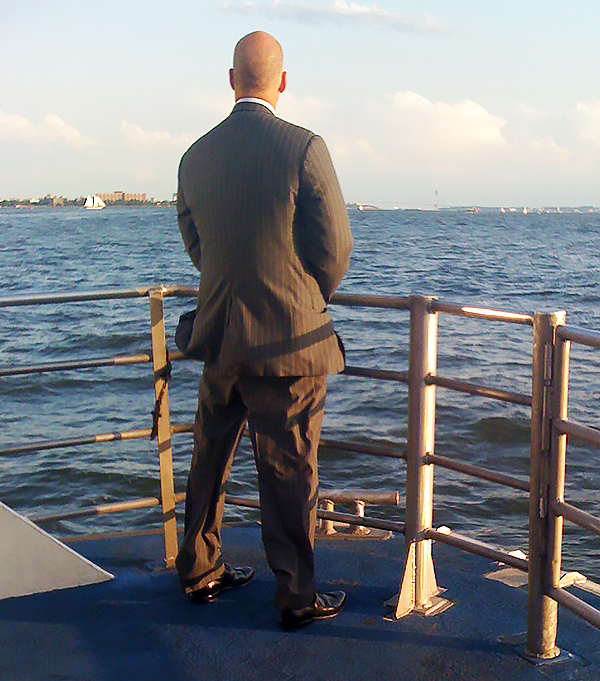 Take a look at this picture which I took a few years ago, on a Friday afternoon, on a New York / New Jersey ferry. After a long and stressful work week (it was 2008), the gentleman in the photo was more than a little inebriated (i.e., could barely stand up), probably the victim of an early happy hour. Now, you should also know that these ferries are fast, and the winds on the river are strong–the wind is often strong enough to blow glasses off your face. This poor soul had urgent business that was unable to wait for the trip across the river, so he walked to the front of the ferry, unzipped, and relieved himself over the bow–directly into what was probably a 35 knot headwind.

Though this happened a while ago, the lesson and the aftermath made a lasting impression (probably more so on the people who did not see it coming and did not step out of the spray). Though few of us might commit the Technicolor version of this error, financial commentators do it all the time, in other ways.

I spent some time this weekend doing a lot of reading–everything from social media, “big” media, gurus and pundits, and paid research. It was interesting to see the commonalities across the group (a less kind assessment might be “groupthink”), but I saw one error repeatedly: attempts to catch or call a trend turn with no justification. This error can be hazardous to your financial health, so let me share a few thoughts.

Why we are always looking for the turn

I think there are good reasons why traders are always looking for the end of the trend. Many of us who do this are competitive and contrary in the extreme. I joke with people that I could have a conversation like this: Me: “Look at the pretty blue sky.” You: “Yes, that really is a pretty color of blue.” Me (now concerned because I agree with someone else): “Well… is it really blue? Isn’t it more blue green? And we know it’s essentially an optical illusion anyway…”

This tendency is natural and pretty common among traders. On one hand, it’s a very good thing–you will do your own work, be naturally distrustful of outside opinions and cynical about information, and will work to think critically about everything. But it’s also a weakness because it makes us naturally inclined to see any market movement and think that the crowd is wrong. The crowd is not always wrong; often, they are right and they are right for a very long time.

I think this is a simple reason why so many of us are always looking for the turn–many traders (not all) are simply wired to be contrary and to think in a contrary way. We are different, and we want to stand apart from the crowd. For many of us, this is a part of our personality and we must learn to manage it, and to understand that it is the lens that can distort everything we see.

Beyond this element of personality, there are also some trading and market related reasons why we are always looking for a turn. There’s a misguided idea that we have to catch the turn to make money. Decades of trend following returns (for example., the Turtles) have proven that you don’t have to catch the turn; it’s enough to take a chunk out of the middle. There’s also a natural inclination to be angry and distrustful of a move we missed–if we see a long, extended, multi-month trend in which we are not participating, it’s natural to be scornful of those who did participate and to look for reasons the trend might be ending.

Many classical chart patterns are taught and used out of context. Any trend will always show multiple “head and shoulders” patterns, and inexperienced chartists will not hesitate to point these out. The problem with poorly defined chart patterns (out of context) is that you can see anything you wish to see in a chart–it’s always possible to justify being long, short, or flat a market, so it’s always possible to find evidence to support whatever you want to do, at least in the absence of clearly defined trading rules and objectives.

Another problem is that many traders use tools that are supposed to somehow measure extremes. Overbought/oversold indicators, sentiment indicators, ratios, bands–the problem is that these all measure the same thing, in a different way. If I get an oversold signal from sentiment, RSI, and some Fibonacci extension, I do not have three signals; I only have one because the tools are so tightly correlated. This is important to understand–if we don’t understand this (the correlation of inputs into a trading decision), then we will have false confidence in our calls, and performance will suffer. Better to know you don’t know than to think you know more than you do.

If a trader places a trade, she makes money if the trade is profitable and loses money if it is not. This is simple, logical, and just. However, for a commentator (blog writer, research provider, tv personality, guru, etc.), the payoffs are very different–the public remembers the times we are right, and very quickly forgets the times we are wrong. The fact there even are permabears (people who have been bearish stocks for decades) who are called to be on TV and in the paper when the market goes down is proof of this fact. It’s possible to run a newsletter or blog business for years making outrageous claims that never come true such as “end of the financial world”, “the coming crash”, “how to protect your assets from the coming seizures”, etc.

The crazier and more outlandish the forecast, the better: if someone says the S&P is going down 500 points tomorrow and he’s wrong, no one will long remember because it was a dumb call. If, however the S&P should, for some reason, go down 500 points, that person is, instantly and forever, the expert who “called the crash”. In fact, if that forecast doesn’t come true but there’s some mild decline in the next few months, creative PR can still tie the forecast in.

Why does this matter? You can read blogs and listen to commentators, but read with skepticism. Realize that the person writing has a reason for calling ends of trends and turns. Your trading account, however, has a different standard: if you lose more on your losing trades than you make on the sum of your winners, that’s going to be a problem, in the long run.

I’ve written about this before, so I will just point you to the relevant posts. One way I have found to avoid the situation where I’m going against the trend is to require some clear signal from the market that the trend might have ended. There are specific patterns that can help: (exhaustion, climax, three pushes, failure tests, price rejection), and then seeing the change of character (new momentum in the other direction) to set up a pullback in the possibly-new trend is key. (Start reading here for ideas on evaluating and catching a possible turn.)

In the absence of that sequence: 1) something to break the trend and 2) new counter-trend momentum and change of character, the best bet is to not try to fade the trend and to wait for clear signals. Let me leave you with a few charts of current markets, with only one question: what direction is the trend in each of these markets? Most of the time, that’s all the commentary we need.

And that guy back at the top of this post? Yeah, don’t be that guy. 🙂 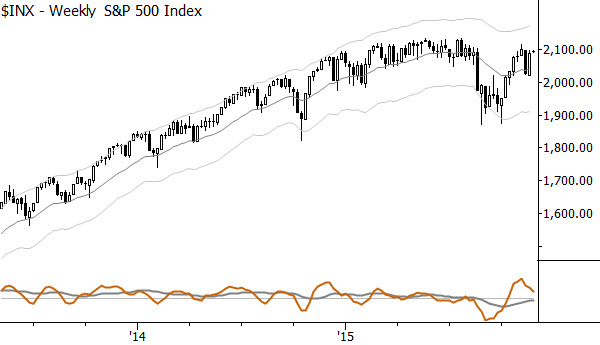 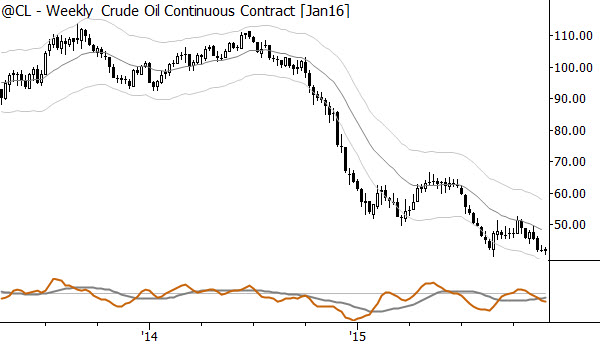 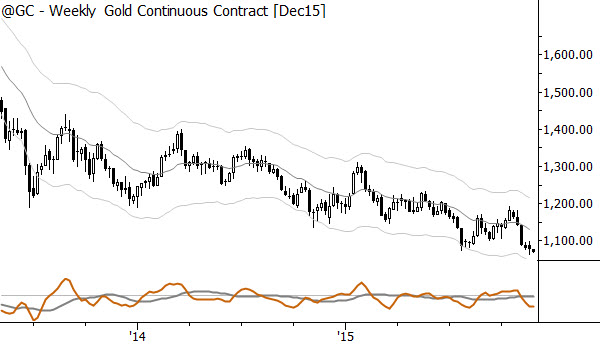 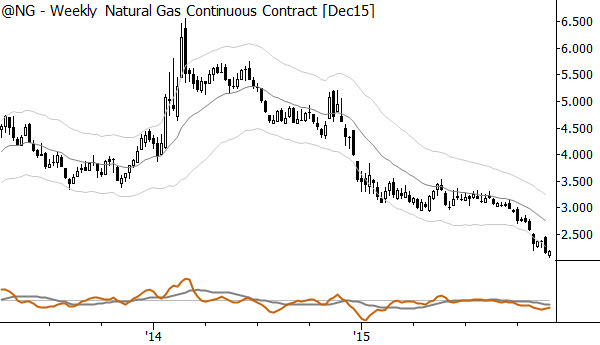 A Problem with ETF Charts

Trading the Rally in India