[dc]I[/dc]’ve seen a lot of charts floating around talking about the “big reversal” in grains, and specifically corn. I think there are a few important lessons here, so allow me to share a few thoughts. First, the reversal argument typically looks something like this: 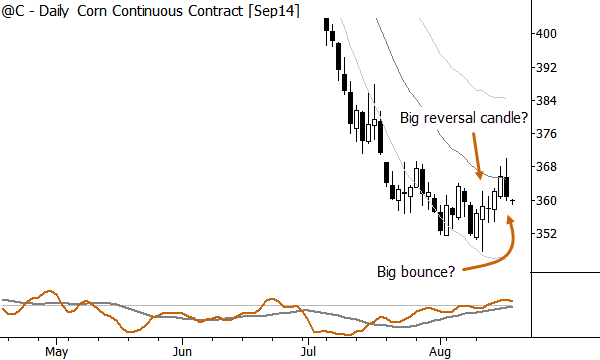 Taken alone, that chart gives a pretty convincing perspective (if you ignore the fact that the “big bounce” has actually been reluctant and appears to be a pretty clear bear flag.) Add to that a divergence on whatever indicator you choose to use((my charts have a 3/10/16 SMA-modified MACD)), a candle stick that is supposed to show a reversal, and you might find yourself long corn. One of the problems here is that electronic charts allow us to zoom wherever we want. This can result in losing a bigger picture perspective on the overall market structure. If we simply step back and look at the bigger picture, we may get a very different idea: 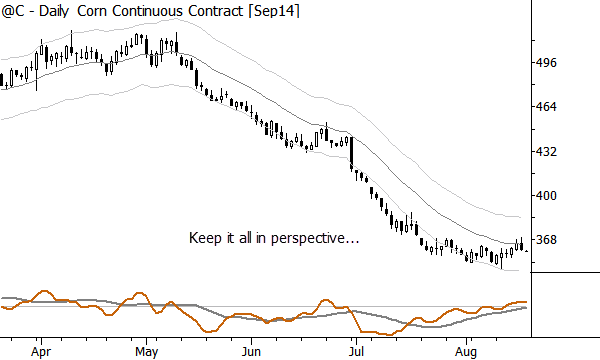 Here, the “reversal” is put in context of the April-August downtrend. In that context, the current bounce is anemic, and we can see there is no real reason to go fishing for a long trade here. Remember, many traders are psychologically inclined to look for trend reversals. I think there are many reasons: perhaps the natural inclination that something going down must be “really cheap” coupled with the ego boost of calling the turn correctly, and you have a seductive combination. Catching turns can be done, and it can be profitable, but it can also be an exercise in frustration. Many traders don’t even realize this because they get such an emotional charge out of being right they ignore the fact that their countertrend trades don’t, on balance, make money. You can avoid many of these mistakes simply by keeping your charts in perspective and not focusing too much on the minute details of, say candle patterns.

If you do want to trade a trend reversal, the best plan is to wait for the market to tip its hand; wait for a clear change of character and then, and only then, look for countertrend trades. There are many ways to do this, but (properly drawn) trendlines being broken can be one sign. A better sign is probably to use a measure that shows the internal balance of buying and selling pressure has shifted. It can be as simple as looking for a few volatile “up days” that show bears have lost control of the market–at any rate, the first step of looking for a countertrend trade is to have some evidence that something has changed. Let the market take the first step, and then seek to follow. Do we see this on corn? Not really. Not yet.

Once you have that initial warning to start considering trades against the established trend, we can begin the process of finding specific entry points. This is where patterns may be more useful: failure tests, small consolidations, lower timeframe breakouts all may have their place, but you are pretty much flipping a coin until the market shows you something has changed. Why not make trading as easy as it possibly can be?

Remember, our charts are only a representation of the buying and selling pressure in the market. You don’t trade the patterns on the charts; you do trade the emotional reactions of other traders to the ever changing landscape of perceived risk and opportunity. If we don’t understand what the charts actually are and what they are saying, charts can hurt a lot more than they can help.

A Trading Lesson in Pullbacks

The Slings and Arrows of Outrageous Fortune