Before I call it a day, I thought I’d share a few thoughts with you. For those of you finding this post later, US stocks broke down Thursday of last week from a long, extended range, and closed the week Friday with what might be charitably called a “mini crash”. On a volatility-adjusted basis, it was the fourth largest weekly loss in the entire history of that index. Asia and Europe picked up where the US left off, and had their own mini crashes “overnight”, and we were left facing one of the largest gap down openings in stock market history.

This post may not be as polished as some of my others (well, maybe they aren’t that polished either), but I think there are some good lessons and points to be made. It’s been a long day, so I’ll beg your pardon for any silly writing mistakes as I try to share a few thoughts.

First, you have to really know yourself and your timeframe and this is a principle that is tested in rough markets. If you’re a long-term investor, there’s little point you watching a 100 point gap down opening (unless you’re looking to buy.) If you’re a short-term trader, that long term bias you have is great. It may be logical, well-reasoned, and it may even be correct, but it doesn’t matter! In the face of a volatile opening, all that matters for short-term traders (let’s define that as intended holding period inside of 2 weeks) is the dynamics of that trading day. Forget your bias, opinion of the Fed, the government, the Dollar, and just focus on reading the market right there. If you can’t focus, then don’t trade.

Now, here’s probably the most difficult lesson I’ve learned: more often than not, large gap openings, especially if they come after multiple day trends, mark the end of the move. You might be rolling your eyes and objecting, saying that buying that gap was unrealistic. (It wasn’t.) Even if so, you can at least temper your bearishness. So many times I’ve seen traders try to force trades and play for the next breakdown (or rally) after a big gap opening. Incidentally, I think this tendency may be magnified in a group setting, though that’s just a theory. Certainly when I used to hang out in chat rooms, and what I’ve seen on trading floors, the atmosphere can make traders very “persistent” hoping for The Big One. The lesson of a gap opening like this is you just saw The Big One. There’s a vanishingly small chance we’d collapse another 100 points on the day, so temper your emotions.

What do you do when volatility becomes extreme? You reduce position size. It is entirely within your power to reduce the volatility of your positions and trading account to levels that you can manage. Get smaller. If that doesn’t do it, get smaller again. You can’t control market volatility, but you must control your own volatility, and the right tool for the job is position sizing.

Blood ran in the streets today, and on our trading screens at the end of the day. Here’s one of the overview screens I watch, as it stood near the close: 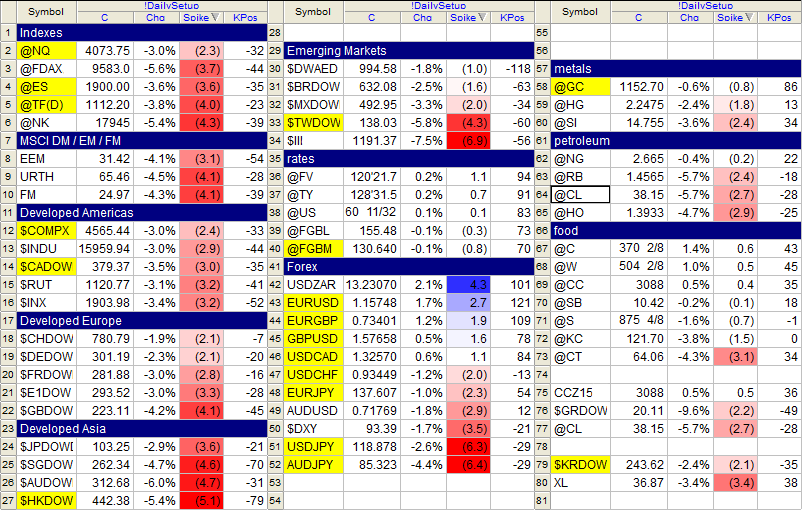 That’s utter and sheer panic: virtually every major stock index destroyed for the day, with many down 3, 4, and even 6 sigma on the day. Major currencies having swings of over 9 sigma intraday, and bond futures catching the flight to safety. What does the future hold? Well, this roadmap still stands, so we will just watch as things unfold later this week.

One of the things I’ve found myself saying most often to people these past few days is: markets are emotional, but you cannot be. Manage your emotions. Manage yourself, and everything else will follow.

The rhythm of the market