Most of us who write about financial markets look to the future. Yes, there is a place for theory, and any theory lies on a firm foundation of what has happened in the past—history matters. But what probably matters most to us is the future: what is around the next turn, and what lies many years out? Why is it, then, that so many analysts, traders, and technicians say things like “we don’t predict the future”? While this might be a comfortable cloak to hide behind, if it were true, there’d be no point to anyone writing anything about the future of financial markets. We do predict, but we have to understand what it means to predict, how to understand our predictions, and how to use them in practice. 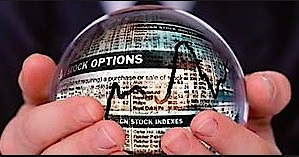 Many market technicians are quick to point out that they do not predict the future. I suspect that this saying has emerged for two reasons. First, there are many mumbo jumbo techniques in technical analysis lore that claim to predict exact turning points in financial markets to the exact hour, minute, and second, and to be able to predict highs and lows with extreme precision, usually based on some secret, arcane formula. You can’t read too much about technical analysis without hearing of these mysterious techniques, and they are usually pinned on some prediction someone made in the past that came true. (Make enough predictions, in a random environment, and some of them will be right. A stopped clock is right twice each day.) All of this, of course, is nonsense. If we understand what the market is, we will quickly see why such techniques cannot exist.

There’s also a certain element of self defense, and this may be exacerbated in the sometimes highly controversial environment of social media. For instance, a reasonable analysis of market XYZ (assume currently at $50) might be: “we want to buy XYZ if prices advance to $55 within the next 6 weeks. If that happens, we will use a stop (risk point) around $49, and will look for a profit target around $60. If XYZ declines, we have no reason to be long and no trade.” Imagine you post an analysis like to any social media network, and XYZ immediately tanks to $40. You’ll likely be hit with a flood of gloating messages saying something like “how did your prediction work out? Went down, eh?” Perhaps too many people simply respond to the critics with something like “trading and predicting are not the same thing and we don’t predict the future.” There’s a grain of truth in all of this, but it also fails to pass the common sense test: if we are saying something about the future, then we are predicting something, or that something is more likely than something else. If we are not saying that, then there’s no reason to say anything at all.

The future and uncertainty

Contrary to the current conventional wisdom, I would argue that we do, in fact, predict the future every time we put on a trade or issue a market forecast. However, we need to think a bit about that future, and about how probability works.

What we do not do is to predict the future with any degree of certainty. That is impossible. We have to know that, so we understand what is possible, and why it matters. Any financial market is highly competitive, with many people trying to make a profit. There can be many reasons, some logical, some nonsensical, why people buy and sell, so there is a lot of noise (random price jitters) in any market. Nothing, in any market, can be known with certainty, and that is one of the “Holy Grail” revelations of trading. When you start to understand that, you start to understand your job as a trader.

So, if the market is noisy and uncertain, how do we think about the future? Here’s one way I teach it: imagine that you are standing in a field that stretches before you to the horizon. You can look behind you, and clearly see the path you took to get here (the path of past prices). However, let’s look ahead, to the future. What do we see? Imagine a cone extending out from the point where you currently stand. A few steps in front of your feet, the boundaries of the cone are pretty close. In fact, on the next step you take, the cone is very narrow because you can’t go much to your right or left, even if you jump. But, as the cone extends out, it gets wider and wider—the further you go ahead (out in time) the less certain we are where you’re going to be. This is a common sense example from the physical world, but it can help to show us some truths about the way markets work.

In reality, we can make some better guesses about where you will be. Most people tend to walk mostly forward. What if we were to let you walk a path into the future, fly out with a helicopter, pick you up, and return you to the starting point? What if we did that over and over, recording the path you walked each time? We’d probably find you ended up going more or less straight ahead most times, so a more accurate way to see our cone of uncertainty—a better way—would be that it is darker in the middle, meaning you are more likely to be there than at the edges of the cone. This is the way it is with financial markets.

What can we really know?

We can’t know the future with certainty. On any trip, we didn’t know where you’d end up—even though it’s unlikely you’d be really far to one side, it’s possible. With financial markets, our “best guess” is that the future will look more or less like the past, meaning that prices will probably end up somewhere around current prices. (This is the assumption behind a lot of options pricing models and other quant models.) But, sometimes, we can tilt the odds in our favor. This is only a small thing, but here’s the good news: it is enough. If we can find these “tilts” and know when to place bets aligned with them, we can make a lot of money over time in the market.

If we do not have those tilts (or statistical “edges”) then we can’t place any bets. These tilts are only small things, as I said: imagine you are standing at the edge of that field, and see that great, fuzzy cone of uncertainty extending out in front of you. Now, imagine that cone is tilted one way or another, so we know there is a tiny chance that you’re going to go more in one direction or another. Whatever method we use to trade the markets—technical, fundamental, macro, etc.—that’s all we are doing. If it works, what we are doing is identifying a spot where the future of prices are more likely to go in one direction than another. Now, what we do with that information? That’s where the art and science of trading truly begin.

This post was originally posted on See It Market, where I am a contributing author.

The Market is Not a Math Problem

Chart of the Day: AAPL

I need your help! A call for logo submissions