Trading is ugly. Many of us, when we first get into the business, have the idea that the market will eventually be an ATM machine—you can sit down at the screen, do some things, and money will come flowing out.

In the very long run… yeah, it sorta works like that. Over a large enough of set of trades, if you have an edge and don’t make mistakes, you’ll very likely make money, and maybe a lot of money. But the short run—the day to day—can be very different. 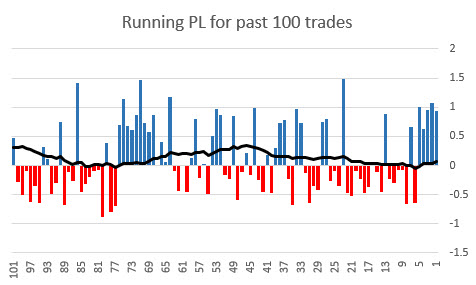 The chart above shows the P&L for the last 100 trades of a very solid and robust trading strategy. There’s a good edge here, and it’s made consistent money for years and years.

And the recent performance is pretty impressive, isn’t it? Five winners in a row, most of which hang out around +1R—nothing wrong with that! Losses also seem to be under control, with most losses coming in around -0.5R and no big outlier losses.

But look back a little bit… around 20 trades back. On the chart, it’s easy to lose track of, but there were a string of trades where we had 5, 6, 7 losing trades in a row. The best outcome was a scratch. Then a single average size winner (which didn’t really make up for the losses that came before)… and then more losses.

How do you think that felt? How hard do you think it was to put on new trades knowing that it’s been 10 trades or more since you made any real money?

This, folks, is real life. Trading is ugly, hard, and challenging, so we need to focus on eliminating many of the challenges we create for ourselves. We can make trading much harder than it is if we get emotional and start making mistakes. What do we do in a string of losses like this? As some one well-acquainted with strings of losses, here are some things that have served me well over the years:

The point is that you need a plan and procedure in place before you get in a rough spot. Make no mistake, you are going to get into rough spots! You don’t want to be figuring it out as you go… the time to make a battle plan is before the first shot is fired.

The rhythm of the market