[dc]I[/dc] distinctly remember my first trades: the months of fevered study and preparation, the excitement of filling out those first brokerage forms, getting the first statements in the mail, and then the overwhelming rush of picking up the phone to put on those first trades. Though I had no easy access to live price data, I’m sure I would have been glued to the screen watching every tick if I did–counting the seconds until the fountain of money started flowing into my account. I also remember the agony of the botched trades, or, the horrible pain of loss when I had to get out–and, it should be said, not always at my stop.

As I’ve written before, those first trades were not happy trades; success was elusive. In fact, nothing I did seemed to work, but the emotional roller coaster was, shall we say, extreme. Though I have never particularly liked gambling (because I can so clearly feel the odds are not ever in my favor), I could understand how someone could become addicted to the rush, and how even rare, fleeing, partial success could be powerful reinforcement. Perhaps one of the ways I was lucky as a trader was that I was not wired like that.

Anyway, I struggled for a very long time, and I can point to something that marked a real turning point. I remember putting on a trade, and just not caring about the outcome. Win? Lose? Both? On a very deep level, I simply did not care. I had turned a corner, and I didn’t even realize it at the time. 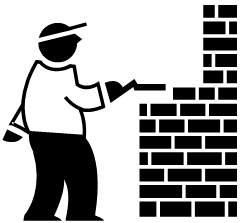 I had stumbled onto what I think is one of the keys to proper trading psychology. You have to be unattached to the outcome of any trade, and, especially for developing traders, this can be scary. Too many people are attracted to trading because of the perceived excitement. (Q; Why do you want to trade? A: I want to work in a fast-paced, exciting environment where every day is a new challenge…. BZZZZ! Thank you for playing. Next.) Proper, professional trading is anything but exciting–it is routine, and, hopefully, predictable. As a friend of mine said, being a trader is a lot like being a bricklayer. You put a brick down, you put mortar down, you smooth it, and you put another brick down… repeat. All day. Every day. Eventually, you build a big wall, but the act of putting the bricks down is just routine. On some level, professional trading is boring, and it should be. What we need is structure, routine, and a methodology that points toward repetitive elements of market behavior. What we don’t need is excitement. Be a bricklayer.

We all know Ed Seykota’s now-famous quote: “Win or lose, everybody gets what they want out of the market.” Too many traders come to the market seeking excitement. If you do, you will find excitement. You can have whatever you want, but just know that exciting trading and making money do not often overlap in the marketplace.

You can have whatever you want. What do you really want?

10000 hours, trading, and what really matters