[dc]I[/dc]’ve been thinking a lot lately about why I do and believe the things I do as a trader. I would like to write a post here that might be a bit more narrative than much of what I write (and I promise “narrative” does not mean “rambling”), and take some time to look at my journey and development as a trader. I hope, at the end of this post, you will have a clearer understanding of how I see markets, and how I arrived here.

When I started trading, I knew the absolute minimum any human could have known about financial markets. I’ll shortcut a lot of details here, but one thing you need to realize is that my formal education was as a musician with another degree in comparative religion. I studied philosophy, art, proportion, and looked for meaning in the patterns civilizations had left us–but none of this prepared me for quantitative work in any way. In fact, I took one math class in college and it was essentially a classic “math for poets” class; I joked that we learned some really interesting math concepts, and then spent much of the class talking about how they made us feel. I did, however, discover something interesting from that class–I liked math. Looking back over my education, I refuse to say I was the “victim” of the average American education system, but I certainly had a number of teachers who perhaps were overwhelmed or did not understand how to work with a precocious child. When I learned long division in a few days, rather than the many weeks allotted in the curriculum, I finished all of the long division problems in the book and said “what’s next?” The teacher responded by burying me under endless weeks of additional long division problems, so I learned a lesson quickly–math was pointless, boring, and drudgery. I also learned to keep my mouth shut when I was done with my work, or, truly, in most cases I didn’t even really have to do the work. 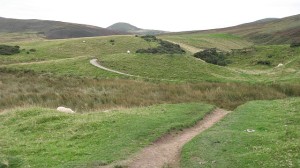 Now, some doors shut to me because of this blindingly poor educational experience, but others opened. I was always a kid torn between artistic pursuits and science, and so I focused my attention on music. Truth be told, I probably learned more valuable lessons here than I would have in the hard sciences. I developed the somewhat unique skill, for a teenager, to be able to sit in one place for six to eight hours a day and work on tiny details with obsession. I also learned about discipline and criticism. I think I am a pretty decent writer (though, as I write that, I realize this particular post holds no evidence whatsoever of that claim), but I have absolutely no ego when working with an editor: You want to cut 40% of what I wrote? Fine, you’re probably right; do it. You don’t like my whole concept? Sigh, again, you’re probably right–I’ll work on it. I think this skill of openly accepting and listening to criticism is something that is not quite normal in the American mindset, and I trace it clearly back to my experiences with strict music teachers. I would labor for weeks and be criticized for details that were outside of what a “normal” person could even hear, and I knew my teachers were right. I even had a teacher smack me in the back of the head, say “everything you are doing is very, very bad”, and walk out of the room after slamming the door. Back then, not every child was a winner every day.

That type of environment would have been very destructive for many people, but I thrived. One of the reasons was that I had a core confidence in my competence and ability to succeed. I believe this translates directly to trading, as well. There is a, perhaps unique, combination of humility and ego that allows an artist to know it can never be perfect and can never even truly be “good enough”, but still have the confidence to breathe life into a creative work in front of a few hundred people. I know that core confidence is essential because there was a point later in life where, due to extraneous factors, I lost it for a bit, and I stumbled. I found myself besieged by doubts, stage fright that I’d never experienced, and making mistakes that were uncharacteristic of my skill and ability. This, too, has direct connections to trading, as most discretionary traders (and longer term managers) experience slumps that may be driven by factors having nothing to do with their trading. When I was struggling as a musician, I knew something was wrong inside me and with the way I related to the outside world. Until I fixed it, I had no chance of being at the top of my game. Again, you can apply those words directly to trading.

Another thing I’ve thought a lot about is that I developed some cognitive skills that I might not have fully appreciated until years later. In fact, it wasn’t until I had really left music behind, done an MBA, and was interviewing for a trading job at a bulge bracket bank that I really got it after the interviewer leaned across the table and told me that I really wasn’t selling my skills and abilities properly. As a musician, I learned to keep hours of music in my head in note-perfect memory. I could memorize an entire symphonic score, note for note, and then either write it down or hear it in my head–I have no idea how many pieces of information this actually is, but probably tens of thousands per hour of music. As a composer, I learned to hold musical ideas in my mind and manipulate them. Now, this is interesting because musical ideas are an abstraction. We may represent them with shapes (and converting that shape language to sound intuitively is another subject), but I could take an idea, stretch it, move it, rotate it, see how the pieces fit with other pieces–somehow we can put structure to ideas that only exist in time, but then I could also use these building blocks to build large pieces of music that communicated something to the listener. You don’t think about what you’re doing when you’re down in the trenches, but that’s a pretty awesome cognitive load, and, because I had built the skills one razor-thin slice at a time, it was all easy.

I’m not sure how well knowledge and skills translate from one domain to another. Dr. Steenbarger has written recently on some tie-ins between chess and trading.  While this is interesting, I’m not sure that time developing trading skill should be spent on chess. If you want to be a good chess player, work on chess. (As an aside, I have quite a fascination with chess. I fast-tracked a lot of positional and theoretical knowledge by replicating some of the old Soviet training techniques. This was a little obsession I had for a while, but I soon discovered I didn’t have the temperament to be a chess player. I think you would be hard pressed to find a chess player who knows as much about that game as I do who plays as badly as I do. I suppose that is some kind of distinction?) Despite what I just told you about my ability to manipulate multidimensional structures in my mental space, I am not at all sure it contributed to my success as a trader. Perhaps I’m wrong, but it at least makes for interesting back story.

So, what did contribute to my success? Well, this post is getting a bit long, so I’ll just give you a little preview and come back tomorrow to flesh it out. I think a few things worked in my favor: I was captivated by the abstract patterns of the markets, and by the experience of trading. (Those are not at all the same thing; some exceptional analysts should not trade.) I had to build a quantitative tool kit basically from the ground up, so this forced me to look deeply into details. I’m a cynic, you might even say a nihilist, so I was able, no, I was driven, to question everything and to believe nothing. This served me well, as it led me out of the valley of the shadow of Traditional Technical Analysis, but I’ll write more on that tomorrow too. I also wasn’t exceptionally well capitalized, so I couldn’t simply throw money at the problem; I had to address my trading issues through careful thought, analysis, and then correct experimentation in the market. Last, and perhaps most important, I was too stubborn to quit. I’ll expand on some of these points tomorrow, and, hopefully, put them together into some meaningful lessons.