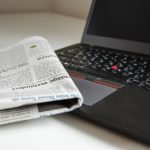 A developing trader said something to me a few weeks ago that has stuck in my mind: he said that he has to be careful what websites he reads because negativity can be dangerous; when you live in a constant state of fear, it colors everything you see. Be careful: you are what you eat (and read and think about!)

I’d challenge you to take a moment and think about the information you consume on a daily basis. First, major media is not perfectly unbiased. Anyone who works in media wants to engage an audience. We (I’m including myself here because, among other things, I’m a blogger) all know that emotion generates clicks, shares, and reads and negative emotion resonates much more strongly than positive. So, news stories naturally come wrapped in an emotional wrapper with a provocative and emotional headline, and our brains naturally accept the emotion with the facts.

Major media has a mandate to be more or less unbiased, and most major media sources accomplish this fairly well. But what about blogs and newsletters and sources that are intended to be biased? Some of the most popular sites on the internet feature an incredible dose of emotion—fear and hate will provoke and engage an audience and build a core audience very well.

So take a few moments today and do an information inventory. Ask yourself what sites and sources you regularly read and how much emotion is baked into them. (I’m not going to call out any specific sites or authors, but I think you will be able to read between the lines.) For traders, there are a few specific things to watch for:

Once you’ve taken a serious look at the information you consume, then you’re in a position to figure out what do to about it. I suggest trying an information diet: First, cut out virtually everything you read. If you are a news junkie, this may feel uncomfortable. You may feel blind or cut off, but give it a chance. Avoid clicking or reading for a week, and see how your emotional state changes.

Then you can start adding things back, a little at a time, and monitoring your emotional state while you do so. If you find yourself sucked into hours of clicking and sharing emotional and negative articles, first of all congratulate the blog owner on building an engaging blog, but then step away and rethink. You can absorb information, but you need to be careful about the emotion that goes with it.

Reader question: what do I do when I miss the move?