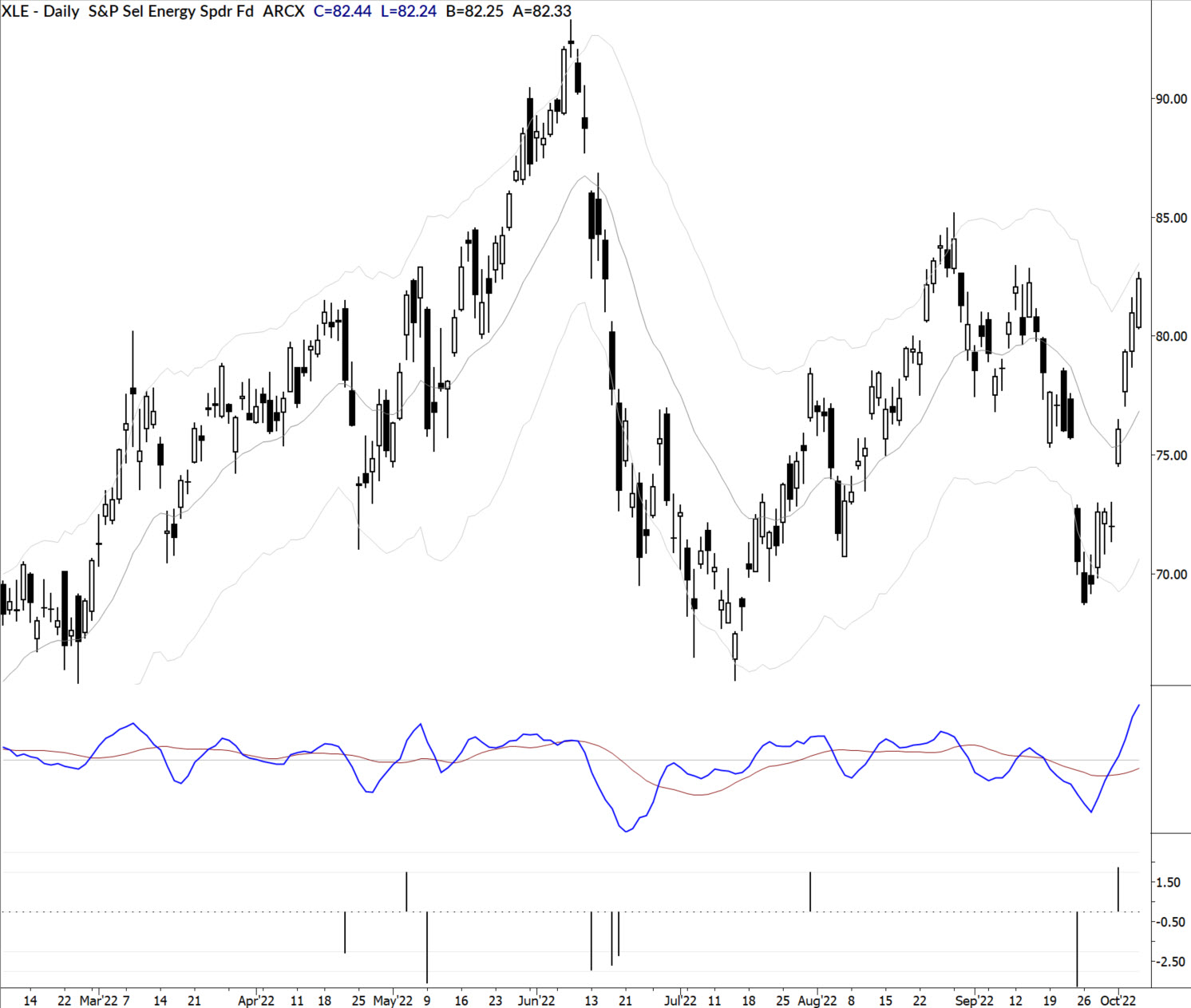 There are about ten thousand ways a trade idea can go wrong. You don’t have to trade very long to seemingly encounter most of them in your first handful of trades! The goal, of course, is to manage behavior and to collapse all of those possibilities to a few scenarios and cases that will result in consistent action from the trader.

A look back at a trade idea: shorting XLE

At the end of last week (9/30/22), we were looking at some really great short setups in Energy stocks. Now, we knew these were potentially problematic trades. Energy has been a clearly leading sector since the first quarter of 2020, and, at various points, was more or less the only sector holding the market up.

This type of sector leadership tends to be persistent, which means that betting against it is usually a losing proposition. Still, leadership does rotate, and former leaders (Tech, for instance) often give up that leadership with volatile collapses.

So, we knew we were proposing a trade idea that would… to put it mildly… not be boring! It was reasonable to expect a quick resolution in either direction.

The best kind of failure

Most of our trading in recent years has been trading consolidations (flags, ledges, triangles) in trends, or at structural points where trends might be starting. I’ve written, literally, hundreds of thousands of words on these patterns, but let’s focus on one clear advantage: if you enter them correctly, you can often dodge losing trades with no loss.

This simply means waiting for a breakdown to enter. You can define the confines of the pattern with a trendline, with pivot points, with lower timeframe patterns—lots of things work, but you need the confirmation of price movement outside the pattern to trigger you into a trade.

Once you’re in, you need confirmation of momentum to hold the trade. The easiest way to do this is to simply look at the close of the bar that gets you in the trade. If that close shows strong momentum (in this specific case, weakness), then you hold the trade. Otherwise, you get out.

The most important mental skill for success

This strategy will result in small wins and losses that largely (but maybe not completely) offset each other. However, if you aren’t disciplined and hold some of the losing trades too long, you’ll accumulate enough and large enough losses to do some damage, so this brings us to the key skill: flexibility.

“Strong opinions, weekly held” is the motto we live by. As a trader, you are taking significant risk—it’s not that each decision is life and death, but there are serious consequences to our decisions. Make the wrong decision, and you can lose everything you own… and, for too many traders, it actually has been life and death.

So, to have the guts to step up and put on a position takes some very strong opinions! If I’m wrong, I’m going to lose money, and if I’m wrong and stupid I could lose a lot of money. But the real secret is in “loosely held”, and this is a most unnatural thing for humans.

Think about the all of the fervor over politics and Covid we’ve seen over the past year. How do people generally handle disagreements? Normal people dig in deeper, seek confirmation, and ignore (or explain away) evidence that contradicts their opinions. Separating someone from their opinion is often almost impossible!

This is how normal human thought works, but traders must be different. Traders must be willing to have a very strong opinion—the strongest in the world, perhaps… the most certain—and then to change it instantly when the right information contradicts that opinion.

And this little trade idea provides a great example of that. Over the weekend, we loved the pattern in the index—we spent quite a bit of time looking at probably a hundred individual names, and were ready to short the best examples early Monday morning. We’d considered how to hedge trades, how much correlated exposure we were comfortable with. In short, we were all over this short.

And what happened? Monday morning, the XLE (and nearly every stock in the sector) gapped up with a very large gap. We simply could not have been more wrong if we had tried—the shorts were perfectly, exactly, almost beautifully wrong. So what did we do?

Absolutely nothing. The P&L impact of this stunning pattern failure was absolutely zero—no trades were entered because we had no downside breakouts, and certainly no confirmation. The market did not care about our opinion, or the time we had put in to craft solid trade ideas.

This started out as a blog about how to trade a technical pattern. And that is important: if you’re trading consolidation patterns (and I think most traders should be!), enter with a break of the pattern, get out of bad trades, and only hold with confirming momentum. That’s a simple lesson, but I think the psychological skills needed to hammer that lesson into consistent behavior are not so easily grasped.

You’ll be wrong trading, and often. With some kinds of trading, you’ll be wrong about half the time. It’s fine to be wrong—but staying wrong… that’s the problem. You get many choices in trading, and the choice to lose your opinion or your money is one you’ll be offered many times.

The line in the sand