I am still trying to figure out how to incorporate Twitter and other social media into my work. One thing that has become very clear is that tweeting each trade or position just doesn’t make sense. For me, I don’t necessarily want the world to be able to figure out where my stops might be, and there’s no point creating potential liquidity problems on entries and exits. For the reader, I also don’t really see the point. You cannot hope to be successful following some else’s trades. (Furthermore, I suspect the vast majority of trades tweeted are mostly for ego purposes.) I share my market opinions every day in my Waverly Advisors work, and I work very, very hard to eliminate as much bias and ego from my analysis and trading–being involved in the Twitter stream actually works against that goal. In addition, I see this blog evolving to focus more on trading concepts rather than specific, current trading setups. However, I know it also will be useful to occasionally look at some current market situations; some lessons are best learned in real-time as patterns evolve. With that in mind, let me share some thoughts on the current situation in US stock indexes, using the S&P 500 as a proxy for the broad market.

First, a little history is in order. I instituted a bullish bias on US Equities in my Waverly research near the end of the third quarter 2010. A bias like this is primarily a backdrop and context–perhaps most useful from an allocation standpoint, but we are comfortable trading both with and against the bias as dictated by short-term patterns. We maintained that bias, with various callouts for spots to increase and reduce exposure along the way, until 8/4/11 when we made the following bearish call:

The video shows a little bit of my analytical approach to markets, and how simple patterns can sometimes give an edge to market direction much further out. (Also, not emphasized in the video is that fact that the pattern has implications for volatility in addition to direction.)

Next, let’s consider the money flows in and out sector indexes. A good way to visualize this is to look at the spread of cash sector indexes against the cash S&P. You can use ETF’s (XLE/SPY, XLB/SPY, etc), but there are some nasty issues with dividend timing. it is best to avoid doing any analytical work on ETF products; stick to cash or futures and make sure to always be comparing apples to apples. The following chart shows nine major sectors against the S&P. When the lines go up, the sector is outperforming the market on a relative basis. It is completely possible for the index to go down, but to outperform the S&P, so the line can go up. Lastly, note that these are weekly charts. Each dot represents one week’s trading.

From this, I draw a few interesting points. (Refer to numbered areas on the chart):

Next, consider the very high-level technical picture. This is a weekly chart of the S&P Cash index, with lines drawn according to a proprietary rule set I call Algo Swings. The details of the methodology are not important; it simply delineates the major swings in the market. (Note also that this chart is log-scaled. Anytime you are looking at a chart that includes a large price change (say > 50%), it should be log-scaled.) The most important thing to notice here is that recent downswing is large enough to break the established trend pattern. It is longer than any downswing in the trend in terms of both price and time. Sometimes, simple analysis is enough. 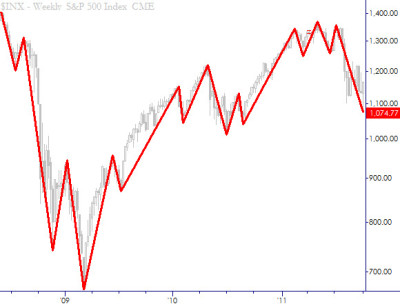 The next level is to look at an actual chart of the weekly timeframe. What stands out here, to my eye, is the large downthrust and subsequent consolidation. This is a pattern that should generate another downswing. This is a big part of the reason why I consider the over-arching technical backdrop to be quite bearish. 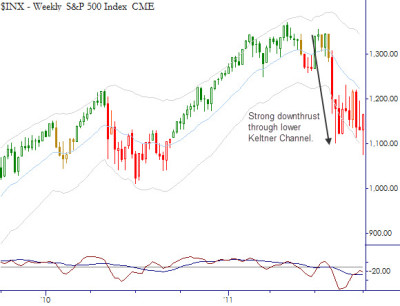 Lastly, a look at the daily chart shows some interesting patterns. Four trades are marked, with decisions I made in real-time. (Note that these decisions were filtered into individual Equities, except for the last, which was a long in the S&P futures. Regardless, the index structure drove much of the decision process in the individual issues.) The first, a possible short at the first downturn after the selloff I skipped. Why? Because volatility was so elevated and the bounce was not long enough or far enough to provide a good consolidation for further downside. My sense was that any move down at that point would be likely to fail. (The discussion of how to manage trading positions in high volatility conditions is a subject for another blog. The short answer is trade less and trade smaller. Large price swings and low liquidity (= large spreads) create a treacherous environment. Some traders become more aggressive in these environments, but it is almost always the wrong choice.) 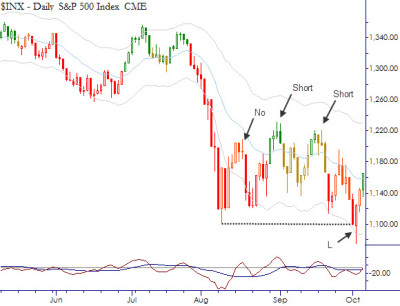 Two shorts are marked next on the chart. In both of these, note that the market had three to four days of downside follow through, and then it was bought. At both of these inflections, I entered short positions that, frankly, did not pay off very well (with the exception of a short in ANR that worked very well.) This is a good reminder that all we can do is to identify the inflections, put on the positions, and manage the risk. Don’t be a hero and don’t be stubborn because even the best setups fail at times. The Long trade at the end of the chart, I already discussed in this blog written early today.

At this point, this market has entered a complex and complicated state. Many times (80%+) there is simply no strong technical edge in any given market, and it is equally possible to make a case for up, down, or sideways action. (“I don’t know” is a valuable phrase for short and intermediate-term traders to learn.) We are still long a couple of individual names, and the long S&P trade is within a few handles of its first (1X initial risk) profit target, but it is difficult to justify new positions at this point–there is still a bearish overhang and context in this market; any long trade is only a countertrend trade, not an allocation decision. If more strength comes in, the bearish edge can be further eroded, but, if the bounce fails around current levels, many individual names and sectors will be painting attractive bear flags near recent lows, which could presage a turn into another significant downleg.

In conclusion, some points to think about:

China is in a bear market! Now what?