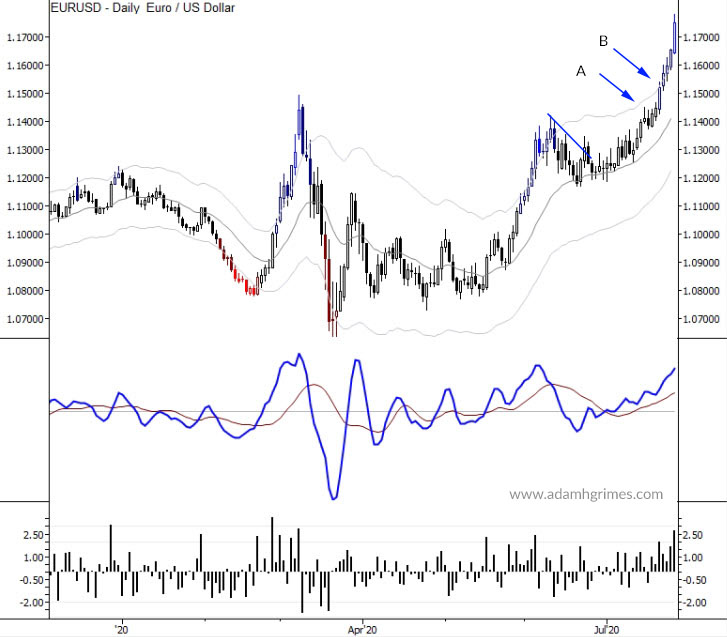 What is different and what stays the same? This is one of the key questions traders who trade on different timeframes or in different markets face.

We often hear the argument that a technical tool or pattern works just the same on any market or any timeframe, that we can analyze a currency chart the same way we analyze a stock chart or a commodity chart. People who make this claim invariably are what I would describe as casual chartists—people who simply look at charts, maybe draw some lines, imagine some Fibonacci levels, and call out targets.

Who never makes this claim? People who do actual analysis of markets, whether through system development or quant analysis. These people know that there are some subtle, but very important differences between asset classes. (My guess is many of the casual chartists would discover the same thing if they were actually putting on trades, but that’s another subject!)

Similar does not mean the same

On the daily chart, to grossly oversimplify, stocks tend to mean revert more than they tend to make sharp momentum moves. Of course, your brain is probably already supplying many examples of why this statement is wrong, but you’re anchoring on recent (late July 2020, for posterity) events. Yes, TSLA has made a gigantic run and hasn’t stopped. Yes, some stocks have been smashed by COVID (e.g., HTZ, CCL, etc.) and haven’t snapped back. In fact, we can look back over recent years and see that some tech stocks have been on a seemingly unstoppable run.

This is true, but this is also why perspective matters. In anchoring on those recent events, you’re bowing to a cognitive bias and making a common error. The only way I’ve ever found to contradict it is to look at stats over a large number of events over a long timeframe, and there you’ll find stocks tend to mean revert more than extend. (Footnote: just to throw in another complication, stocks do tend to drift upward at about 7% a year, on average. This needs to be considered in our analysis, as well.)

Currencies, on the other hand, don’t mean revert in quite the same way. Here’s why this matters: most stock traders, looking at the chart of the EURUSD above, might have expected a reversal somewhere around points A or B. However, if we understand the patterns have different expectations, we know to lean heavily long at these points, and that there’s a higher probability of a currency extending into a slide along the bands trend than a stock.

The Devil is in the details

We can even use many of the same tools on all asset classes. For instance, I trade pullbacks in stocks and currencies, but I do so in subtly different ways (some of which I may not be fully aware of.) One key difference is that you want to “give currency trades a chance”—you can reasonably expect extension in a way stocks do not extend, and must absolutely avoid the tendency to want to fade or go against a momentum move in a currency chart.

This is another example that is not after the fact; this was perfectly clear as these patterns unfolded in recent weeks, and I shared my thoughts with our MarketLife members in daily analysis. The challenge for currency traders has been being patient through recent periods of consolidation, but being ready to pounce on trade entries when they triggered. Come to think of it… that’s the challenge of all trading in all markets, most of the time!

What Do You Do About It?

First of all, if you’re trading two asset classes or timeframes, look at your performance on both. If you are doing well on one, cut your risk on the other and focus on where you have a demonstrable edge—where you’ve proven you can make money.

Then reconsider where you are struggling. We often blame psychology when methodology is the real problem. If, for instance, you’ve been successful daytrading and are getting killed on the daily timeframe, the problem might not be in your head. The problem might be that you are trying to apply daytrading tools to a timeframe where they do not have an edge because different timeframes trade differently!

This may require a complete overhaul of your approach on the new timeframe, or it may just need a subtle shift. But you won’t know that unless you step back, drop the assumption that trading tools are universal, and do the deep work to nail down your edge on each market.