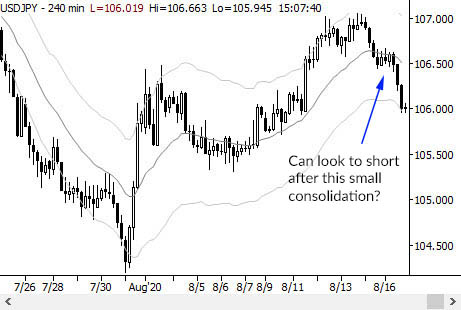 Today, I want to share some thoughts I’m having on a pattern I usually skip in my own trading. I’m wondering if maybe these are trades I should be taking…

The chart above shows a pattern that is almost an anti. (See other examples here.) But not quite. Here’s what’s driving the pattern:

And that’s where we get stuck. In the best examples of Antis, the downside momentum is fairly extreme. Momentum indicators (not pictured on this chart) make new lows; they did not make new lows in this case. The chart shows a clear change of character; on this chart it’s not quite clear.

Because the shift isn’t clear enough and the downward momentum not strong enough, I usually pass on these trades. But here’s yet another example of a trade that extended into another clean move to a measured move objective (which would have been through a 1R profit target!)

I don’t know what the answer to this will be because, as discretionary traders, we have to have some guidelines that say when a pattern meets the criteria and is worth risking money on—when a trade is “good enough”. While rules and guidelines are important, we also have to respond to subtle shifts in the market and in our own trading and perception.

So… here’s a blog post without an answer, but only a question. This is something I’ll continue to think about over the coming weeks, and might do a followup post somewhere down the line!

(FYI, our MarketLife members had plenty of short exposure to the USD already, with trades in the EUR, GBP, CHF, and CAD. That was another reason why I skipped the trade—I had on enough correlated USD risk in my account, but that does not change the fact that this pattern might be due for some deep thought and reexamination.)