[dc]O[/dc]n the close of 10/4, we (Waverly Advisors) initiated a long position in the S&P futures based on the pattern discussed in this post. (More information on the pattern and the analysis supporting the trade can be found here. I also discussed this the following day on CNBC.) I thought it might be instructive to look at how the trade played out, and to see how a conflicting setup for a short trade can help us to read market action going forward.

Take a look at the daily chart of the S&P 500 futures (24 hour session) with two trades marked. 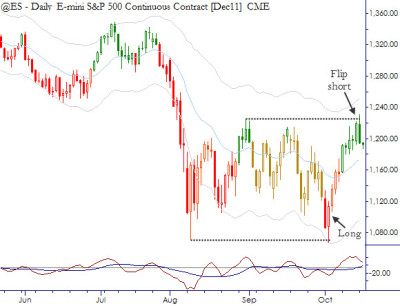 The first trade is the long I have already discussed at some length. From a trade management perspective, my plan is fairly consistent across all of my trades. I know my entry price and the location of my stop. (In this case, the initial stop goes somewhere around the previous swing; you can make a good argument for placing it either slightly inside or beyond that swing.) I also know the actual dollar amount I am risking on the trade: I use a fixed percentage of the account’s net liquidating value (net liq), marked to market every day on close. As a rough rule of thumb, I consider risking anything less than 1% of the account per trade to be extremely conservative, and anything over 4% to be reckless. Most traders will find that a number somewhere between 1%-2% offers a good compromise between capital preservation and the pursuit of outsized profits. I am completely consistent with the amount risked on every trade within a category of trades, though some categories of trades may be done on smaller risk. In particular, aggressive countertrend trades are done half-size relative to trend trades due to increased gap risk.

The number of shares or contracts to trade is then determined by dividing the intended risk by the distance from the entry to the stop. (I will walk through this math in more detail in a future post. I just wanted to introduce the concept here.) Once the trade is entered, I consistently take profits at a point where my open profit is equal to my initial risk, or the 1X point, usually exiting between 25% and 50% of the initial trade. In this particular long, the trade cleanly reached this target, I sold part of the position, and then trailed a stop on the remainder.

Today, the market traded above the clear previous swing point, and failed in another failure test, this time to the short side. Now, the pattern itself is simple, but there are a number of other factors that add context to the trade. In this case, I believe the bigger picture technical structure remains overwhelmingly bearish; I have written this daily in my Waverly report and cautioned traders to not assume that early October marked any significant bottom for the market. Today, sector flows and the behavior of many individual stocks suggested broad weakness early on. We were able to exit the remainder of the long trade, flip to short, and then position short in several individual stocks as well.

So, to do with this information? Well, if you do watch market action intraday, you can adjust your positions as the trade develops. I came in this morning with two long positions (partial positions in MAKO and HLF, after having taken initial profits last week). As the failure test developed in the morning, I exited MAKO completely, scaled back on HLF, and entered a short in MOS and GMCR. The GMCR trade turned out to be especially fortuitous, as it hit its first profit target within a few hours. This is extremely unusual (the stock was on a -4.0 standard deviation move at the time), but it does happen. Make sure that you can make any intraday adjustments with no emotional involvement. Many traders will find better results making decisions after the market is closed.

If you do not trade individual names, then we can watch how this pattern plays out over the next few weeks to give us some insight into the conviction of the bears. In an ideal failure test, there will be several days of sharp selling this week, driving prices down toward the middle of the range. If, however, major indexes hold together and consolidate near recent highs, the stage could be set for a further advance (i.e. a failure of the failure test). In this case, the probabilities currently favor the shorts, but this can change quickly. For now, I have done all I can: I have positioned short, have taken partial profits, and will manage my risk on any rally against the position.

Simple technical patterns, placed in the correct context, have value that goes far beyond trade entries. They can actually be the keys to an analytical methodology that gives deep insight into the forces behind price patterns.

Why should you be able to make money?