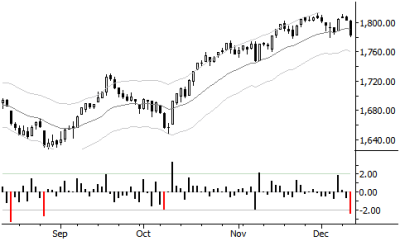 Yesterday’s downward closes in major stock indexes deserve some attention; as our readers know, we have long held a strongly bullish bias, and the first question is, does this change anything? Over the intermediate term (2+ months), no, it does not. This could be the beginning of a move that would eventually change our bias, but, taken alone, this is simply a single weak day. The next question is, what happens after strong downward closes in December? Looking at the S&P 500 back to 1983 (7,525 trading days), we find 266 days that closed with larger than -2.0 standard deviation losses (3.5% of all trading days.) We do not find a strong directional edge after such a common signal: excess returns of 17 bps a week later, -14 two weeks later, and 1 bp a month later, against standard deviations of 282, 426, and 546 bps—all of these numbers are well within the range of statistical noise. However, only 9 of those <-2.0 stdev days occurred in December. First lesson: strong downward closes are unusual in December, as 22 “should have” been expected in December, if strong downward closes were evenly distributed throughout the year. The average excess return 1 week, 2 weeks, and 1 month out are a whopping 268 bp, 256 bp, and 205 bp (against standard deviations of 357, 251, and 364). Second lesson: historically, strong downward closes in December have been strong bullish signals. History is only a guide, and there is always the chance that this will be the beginning of an outlier event that will see a strong selloff. Risk management is essential—watch position sizes and do not violate your stop and risk points on trade, regardless of what the underlying tendencies may be. However, history is our best guide, and probabilities favor a quick recovery and ensuing rally from this point.

If you’re interested, here are the other large December selloffs, sorted by their SigmaSpike ranking. It might be instructive to look at each of these dates for further historical context. 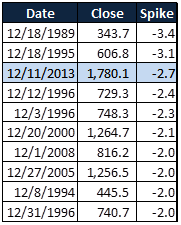 Module 2 of the Options Course: pricing