A quick lesson on trendlines and what they can tell us about market dynamics. Take a look at a fairly long-term chart of the Dow Jones Industrial Average (below) with trendlines doing back to the low in early 2016. First, notice the light little trendline that ends in late 2016. 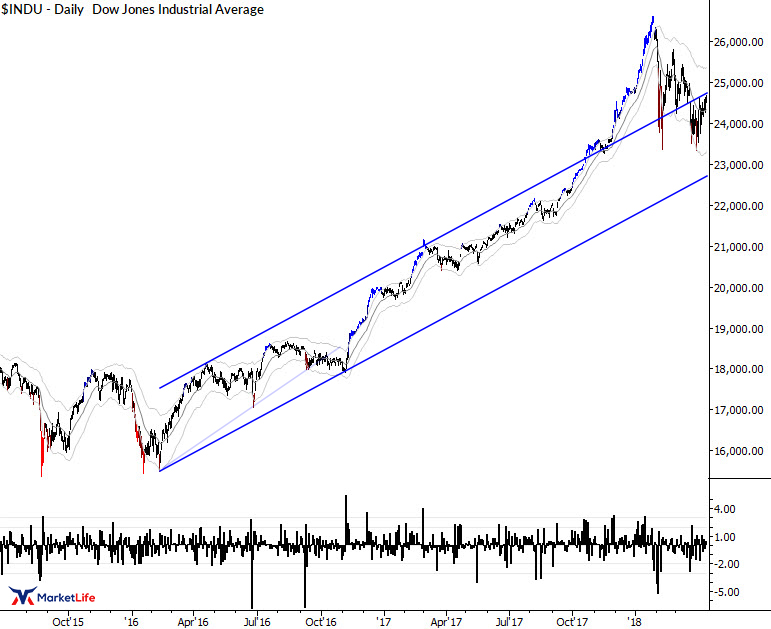 Why does this trendline end? Because price action at the end of 2016 invalidated the line. The line was broken decisively, and once a line is cut or broken we don’t have any good reason to expect it to be meaningful in the future. (In other words, it’s a mistake to carry this line forward.)

Now look at the dark trendlines. These were drawn according to the same, consistent rule set I published many years ago in my book (and in this blog). A valid trendline:

Next, a parallel trendline (trend channel line) was reflected and positioned according to this rule:

Notice what we can learn from these properly drawn trendlines:

So far, this looks like a relatively healthy correction in a market that saw some over exuberance and became at least short-term overbought. Of course, trends do end through those parabolic buying climaxes, so we must watch subsequent action carefully.

One of the advantages of publishing daily research as I do for Waverly Advisors and MarketLife is that I’ve created a real “point in time” journal of my thoughts and analytical tools over the years. It’s fascinating to see the power of simple tools like this, when they reflect growth, psychology, and other market dynamics.

(Edit: my work is now available at Talon Advisors.)

Take a few moments to check out those old blog posts and to see if this simple rule set for trendlines can help you in your own trading and analysis.

Reading the chart of Ethereum with sigma spikes: cryptocurrencies aren’t so cryptic after all…

Too Much of a Good Thing