I received a good question from a long-time reader on a trade he executed in CREE. Here’s Jim’s (edited) question:

I’ve been trying to swing trade for a few years now… Regrettably, the broad market indices usually leave me in the dust each month. An incident this morning dealt another blow to my rather fragile trading morale. On March 9 [2016] I had taken a small position in CREE hopefully to ride “one clean swing.” Perhaps I should have exited before today, since CREE mostly went sideways thereafter, but that’s hindsight. Before the market opened today, April 6, a news article reported that the company had made a quarterly earnings preannouncement:  “The lighting maker said its sales will fall far short of expectations because of new product delays and software problems.” The result? An opening gap down of over 14% through my stop and a loss of about five times what I thought I was risking on the trade.  How do you deal with trading events like this? I avoid taking a position in a company that is close to announcing earnings. However, the preannouncement blind-sided me, since it came “out of the blue.” I’ve never been the victim of one before this. Longer term investing, day trading, passive investing, or strictly using ETFs for swing trading are looking more attractive all the time.

In general, I think trade review of specific trades is probably overemphasized, since most of what we see is random. However, there are times that a trade and its management has good lessons, and this is one of those cases. I’ll take the tone through this answer of a stern teacher, and just call out the mistakes as I see them. First, let’s deal with the trade itself. Here’s a chart of the trade, with the reader’s long entry marked as (A). Before reading further, look at the chart, and think about how you feel about the long entry at A. Is this a good trade or not? Why? 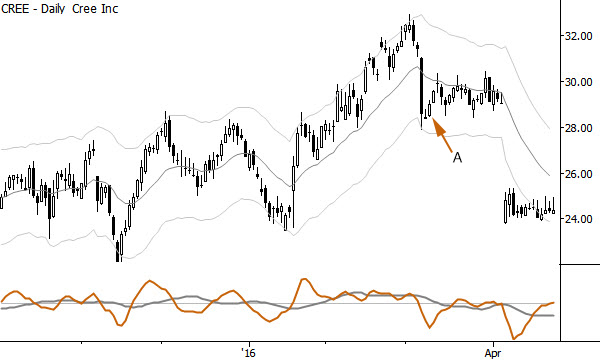 Why are you here?

It’s important to remember why we are in any trade or position. Is it intended to be a long-term investment, held for quarters and years? Is it a one swing with trend trade? Is it a countertrend trade? These questions are critical because each of these trades takes a different approach to trade management and risk. From a simple perspective, we might have a much larger position (relative to our total trading capital) for a swing trade compared to an investment. The swing trade will likely have a closer stop than the investment, which might legitimately have no stop. (Gasp.) If we get “confused” and manage a swing trade like an investment, we’re violating our rules and common sense, but also are taking a big risk on an even larger position.

So, Jim tells me he took a position at (A) with the intent of holding it for “one clean swing.” He then tells me that he should have exited because the market went sideways, but “that’s hindsight”. I would argue, that no, it is not hindsight. Rather, it is a clear violation of your intent for the trade. You thought you were buying for one clean swing, and then the market went sideways. Fine–what you thought would happen did not happen, and there’s a word for that: you were wrong. When you’re wrong, you get out of the trade because your reason for being in the trade no longer exists. That’s a critical point.

Jim’s idea was that CREE would snap back quickly. A trade is basically an experiment; he thought one thing would happen, but something else happened. So you unemotionally get out of the trade. To be perfectly honest, there is absolutely no justification for being in the trade when this surprise gap down happened, based on the information in the question. Error #1: not exiting when the reason for the trade was violated.

Are you reading the market correctly?

Another question I would ask Jim is “you did realize you were doing an aggressive countertrend trade, right?” Was your thesis that this was a stock in a strong uptrend that had a minor collapse, or did you realize that a short-term uptrend was violated with extreme volatility? Here’s the chart of CREE again, with a few more points marked for discussion: 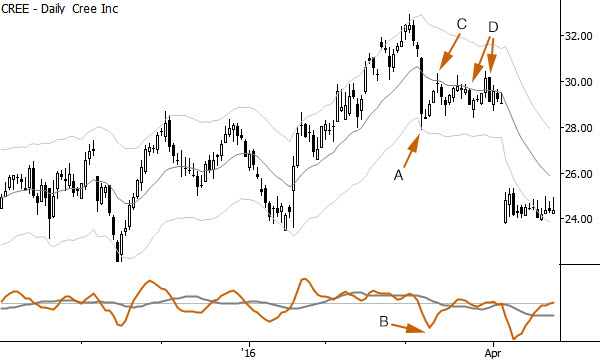 First, you need to look at the big picture. Go look at a weekly chart (not shown here), and you will see that CREE had been in a pretty significant downtrend (from 75.00 to 25.00) since about 2013. This is the context: this is a stock in a longer-term downtrend. Now, maybe we think we identified a trend change in late 2015/early 2016, or perhaps we simply wish to trade a long position in a dowtrending name. This is fine, but let’s at least understand that this is not a strong and intact bull market in this stock.

Now, here’s why we use volatility-adjusted measures: the decline at (A) was a -4.2 sigma decline, the largest volatility-adjusted decline since June 2015. In addition, this selloff put the market through the lower Keltner channel–certainly an extraordinary single-day move. If nothing else, we can look at the chart and see that this is a really big down bar (that’s very technical language there!) If we need further confirmation, we see that the MACD made a new low (relative to its own recent history) at B, indicating that momentum has shifted to the downside–this is a significant change of character to the downside. I would ask Jim if he saw that at the time. We should have been thinking short, not long.

Actually, this trade setup is one of my favorite trades–this is pretty close to a textbook Anti pattern, which is a strong setup for a short trade. Now, maybe Jim just missed this in real time, and that’s ok–we make mistakes. However, if he looks at this now, and has been through my blog, trading course, and book, I would gently suggest that he needs to review basic trading patterns. Familiarity with the Anti would have prevented this trade entry, or at least emphasized the danger in the trade.

Now, none of this is hindsight. The lower channel was touched. MACD made a new low. We had a very large sigma single day decline. These are objective, readable price structures, and they must shift our focus to the bear case. Jim may still have a trade here–you want to buy this because you think it’s oversold? That’s a legitimate trade, but then you must consider the expectations of that trade. You are now in an aggressive countertrend trade. Your job is to take profits quickly (probably within a week), to move the stop to breakeven quickly, and generally, to reduce risk. I don’t want to create a fearful environment, but you just pulled a pin on a hand grenade and let go of the spoon. The clock, in other words, is ticking.

Jim thought he was in for “one clean swing”, but the doji at (C) led to a decline that took the market through his entry price at least twice. You were back to breakeven on the trade twice. Does that seem like one clean swing? In addition, without knowing where his stop was it’s hard to know, but the trade probably stood at +1.0R before going back to breakeven. We had some sharp down days (D), that were also inconsistent with your long idea. Was the trade working, or were you hoping?

Shit happens in trading. There’s no other way to put it–sometimes bad things happen to good traders, and bad things happen to good trades. However, it is also remarkable how often events align with clear technical structures. I’m not sure anyone knew why the stock declined at (A), and that makes me very suspicious. I’m sure Jim has spent a lot of time wondering how he could have predicted this loss. It does happen. (I remember losing 5R or so in a YHOO trade back in the day.) But it doesn’t happen that often. The issue is not predicting the unpredictable–in this case, it’s being long in a stock that is clearly showing weakness, and that’s a lesson that can be learned.

Now, I can also see the pain and suffering in Jim’s message. He talks about his fragile trading morale, and his frustrations with learning to trade. As we know, there’s a whole industry offering succor to struggling traders in the form of trading psychology. So often, I think the answer to trading psychology is doing the right thing. In this case, Jim was doing the wrong thing: he was in a stock with a clear bearish setup, did not leave the trade when his long thesis was violated, maybe was unaware of the danger in the long position, but did not manage the trade appropriately. The psychological distress is a natural consequence of being out of phase with the market.

I hope this has been interesting. What’s Jim’s best course of action here? To review the chart and the pattern, and make sure he understands it. Perhaps to review other charts and look for similar patterns. Perhaps to consider a trading rule like “if I see a large shock against the trend, I will treat any mean reversion trade as aggressively countertrend. I expect countertrend trades to snap against me. I will reduce my risk as appropriate.” And, perhaps, to reconsider his trade management plan and to be sure he has a clear plan for with-trend and countertrend trades.

One last little “trick”: Something that has served me well over the years is that I now expect any trade I get into to be a losing trade. I know I’m about a 50% trader who makes more, on average winning trades, than he loses on losing trades. I literally assume that I am wrong when I get into any position, and then my mindset shifts to making the trade prove itself to me. Why am I going to stay in a trade that’s not working? I’m probably wrong anyway, so I’ll just get out and move on. This might seem like a strange way to think about positions, but it is a good way to manage your psychology, expectations, and to lessen the influence of confirmation bias.

Video blog: trade review and the art of trading management

Trailing stops: 9 ideas you can use today