It’s easy to understand how there might be a pattern in the market that shows we have an edge or a reason to put on a trade. Maybe some combination of factors or patterns shows us that a market is more likely to go up over a certain time period, so we buy it. That’s pretty easy to understand, and it’s how most people think about trading.

There is another way to think about patterns, and I think this is more powerful. We can take a pattern, and then think several steps ahead. Through much the same process a beginning chess player might go through, in which he thinks “ok I move here and then maybe he moves here… and when he moves there I’ll do this… but wait… if he does this instead, then I would do this…” We can play a similar game with the market, looking at how prices and patterns are developing, and thinking a few steps ahead. Take a look at the chart below, which shows the S&P 500 futures a few days after a sharp selloff. I’ve also highlighted two possible scenarios, in light orange and blue, that might have played out. Here’s the chart: 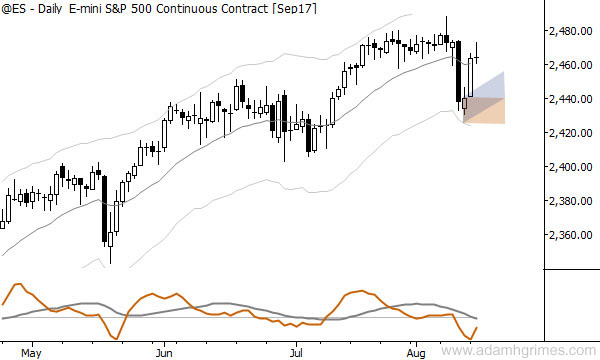 Now, we know that sharp moves in markets tend to produce other sharp moves in the same direction. (Though not exactly the concept, here are some stats to that effect, quantifying the “sharp move” with the Keltner channels.) All other things being equal, a decline like we had last week in the S&P could reasonably be expected to lead to another selloff. (See the NASDAQ around the middle/end of June 2017 for an example.) We also need to be aware that stocks are in an uptrend; this is a bull market. In a bull market, successful shorts are less likely, more difficult, and more likely to be quickly reversed. So, if we are looking for a short at the end of last week (the point at which the colored boxes begin), we need to think carefully about what a good setup would look like.

Simply put, a good short setup will not snap back much. A good short setup would see the market go flat or put in a “reluctant” bounce on lower volatility. These are the price paths I’ve roughly outlined with the colored areas. But this is not what happened. Instead, we’ve seen a sharp snapback this week, telling us that we need to at least move away from the potential for shorts, if not flip our short-term bias to outright long. (by the way, I’ve written about this concept before, and fairly recently, but I thought another look was worthwhile… especially since the market is giving us such a clear lesson right now.)

An important point here is that gathering this information did not cost us a losing trade. We’ve been able to simply assess the character of the market, and see clearly from the proportions of the patterns that the bulls have seized control.

Now, of course, anything can happen, and the extremes of the ups and downs are quite extreme indeed. In today’s market, we have an unusual combination of very low volatility and some significant headline risk (North Korea, etc.) that could send the market into a large, unpredictable move. There’s always the possibility we will be dramatically wrong, but the best we can do is to work to understand when and where the probabilities might be tilted. That’s how we learn to read the market.

Chart of the day: bear flag in gold