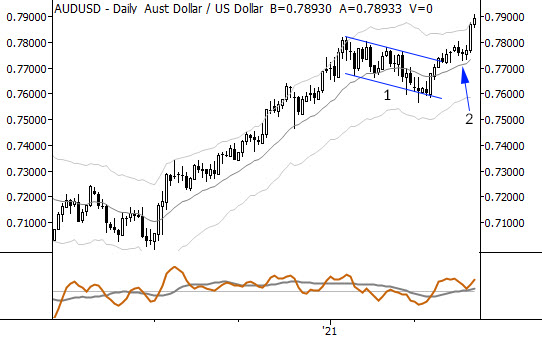 One of the key questions that comes up with developing traders is “how do I get into trades? Where exact do I enter?”

On one hand, the answer to that is that it really doesn’t matter that much—if you get direction right (meaning you can read market structure on the trading timeframe and are using patterns that have an edge) and are consistent (with sizing, entry and exit points), there are many possible plans that will work.

However, we can do a little better than “it doesn’t matter”! Let’s look at a recent trade in the AUDUSD today (2/22/21) and see what we can learn from a few stream-of-consciousness observations.

First, this pattern stands on its own, but we were doing a lot of work analyzing the bigger universe of currencies and the USD as a driver for these trades. That was a secondary macro influence, but it’s enough to see here that this was a strongly trending market that rolled over into a consolidation early in 2021. That’s the setup for the trade: it’s a large bull flag in a trending market.

The bull flag is labeled (1) on the chart, and outlined with two lines. Let’s consider three possible entries:

So, two of those three entries are possibly workable, but I also want to suggest a few more. One potential entry is to simply enter on a break of a key pivot or previous high when the market is in a pullback. This could have resulted in a really good entry here, sweeping you in on the “big bar” off the lows of the pattern.

This is an entry that can also result in some whipsaws and early entries, so one issue any trader working with pullbacks needs to consider is how to deal with entries that don’t see followthrough. If you look at the flag pattern, you’ll see many cases where you might have had entries above the previous bar’s high, and then needed to deal with a failed trade. There are many possible solutions, but it’s something you must consider in your own trading plan—come up with a solution and then be consistent in how you apply that solution.

As an aside: I would not advocate simply buying any break above a previous high in a flag. There are some which are better set up than others, but the basic idea is still the same: you’ll always, with any set of entry criteria, have entries that do not follow through, so you need a plan to deal with those.

I want to point out one more important pattern. The arrow (labeled 2), points to a spot on the chart I have come to call a “nested pullback”. This is a smaller pause or consolidation in the resolution of a bigger pattern. In other words, you look for a bull flag and wait for it to break out, and then, the first pause or consolidation (under the highest high that started the pullback) is likely a good entry.

For me, this is an entry that combines the best of conformation and trade location, and you’ll also usually be executing around some lower timeframe volatility compression—this is a setup for better trending on the breakout of that pattern.

Just a few short lessons from a recent trade here. Spend some time looking at other examples, in other markets, and other timeframes, and think about how you can apply these ideas to your own trading. (It goes without saying that shorts simply take these ideas and flip the chart upside down—the same ideas apply symmetrically.)

The pullback: a trade that works