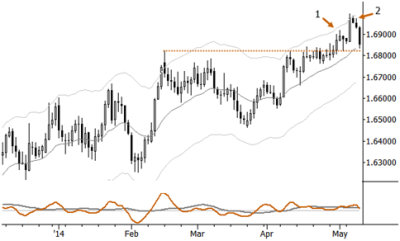 [dc]A[/dc] few weeks ago, I discussed a possible impending breakout in the British pound in this post. This is a good time to take another look at the pattern, how it has developed, and see if we can derive some trading ideas. First, the driving concept here is that higher lows into a resistance level generally set up a good break of that level, and you can often play for some kind of continuation beyond that level. However, execution matters—you cannot simply assume that the market is going higher if you are an active trader.

The first pullback following the break of the resistance is critical. The small pause marked (1) on the chart was that first pullback, and it led to a clean, upside break. This is good. However, the second pullback, (2), appears to be breaking down. From a simple technical perspective, this might seem to be the time to exit longs, and this is one of the pullback failure patterns I discussed in my book. When a pullback breaks down with strong momentum against the intended trade direction, that’s a sign the trend is in trouble.

However, there might be a little more going on here. For whatever reason, markets tend to shake out technical traders. (The reasons probably have to do with markets moving to price levels that generate trading activity—auction theory, but the why is not critical. Just know that it happens.) In this case, and considering how difficult currency trading has been in recent quarters, I’d be inclined to give the trade a little more room. Also, the breakout level is in no way a hard “line in the sand”. Some traders like to exit if the level is broken, but the market knows that. Look at a large number of pullback trades and you will see that the level is absolutely not a critical, defining point for the trade.

One last thought: trade management matters. In my published research, we have held a position in the GBP since late March. This allowed us to endure all of the April slop and chop without micromanaging or even really caring about the day to day fluctuations. I maintain a discipline of taking partial profits at the appropriate points, so we also took partial profits earlier this week (on the big spike up, actually.) A plan like this puts the trader in a position of strength: you now have choices. Do you buy back what you sold? Do you tighten the stop? Do you do nothing at all? I see too many traders trading breakouts in a reactive, nervous mode, but understanding how market structure develops over a large set of trades, having good trade management rules, and, sometimes, a little bit of luck to be well-positioned—these things can really change the way you execute these trades.

A Tale of Two Audiences

Taming the bear in the Russell 2000