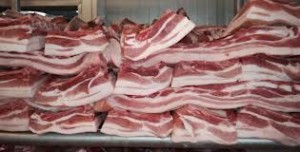 [dc]M[/dc]any years ago, a friend of mine shared an encounter he had with a successful investing club. This club was not like many of the others—they didn’t pool their money to trade stocks, do fundamental research, or, in fact, do any research of any kind. This was a group of Midwestern farmers who traded pork belly futures and pork bellies only. They were wildly successful and more than a little famous, so my friend made the trip to one of their meetings to learn their secret method.

Now, a few things you need to know. Pork bellies were, back in the day, the premier speculative market. They were volatile—sometimes incredibly so—and attracted the most risk-seeking of speculators. (These were days long before S&P futures and long, long before anyone even contemplated an e-mini.) Bellies no longer trade, but the meats, in general, are markets that are dominated by producers and commercial consumers. In other words, when you put on a trade in these markets, you are, by definition, trading against insiders. Concerned about insider trading, are you? Well, now you’re trading in markets that exist for and to facilitate insider trading. These are rough and difficult markets.

So, this group of highly successful traders happily revealed their secret. Each week a member, it didn’t really matter who, would pick up a (paper) chart of pork bellies and hold a pendulum over it. After watching for a moment, it would either swing in a straight line or in a circle. If it went in a straight line, they bought some bellies, and in a circle they sold them short. (This is the well-known ideomotor effect in which small, unconscious muscle movements are magnified. This is the same phenomenon that drives Ouija boards, dowsing rods, and several other purportedly paranormal effects. Depending on your perspective, the ideomotor effect might be a way to tap unconscious knowledge (sometimes this seems likely) or it might be… hogwash (sorry, couldn’t resist!))

My friend was dumbfounded. He’d expected to find some market timing or technical tool, that they were applying their hard-earned agricultural knowledge, or at least some common sense risk management techniques. Instead he found a swinging pendulum. “That’s it?” he stammered.

“Yup. That’s it.” I can imagine the silence and confusion that followed, as both the club and my friend tried to figure out where to go next. As the silence lengthened, one of the farmers offered, “well… there’s just one more little thing…” I can imagine my friend raised his eyebrows at this, waiting. “See, we get right in, and if it don’t work right away, we just get right out. Uh huh… right away. When it goes, they goes right away. When it don’t work, we right get out.” So there you have it: a successful trading strategy ostensibly based on a random entry with a simple, but iron-clad exit rule: cut your losers and let your winners run. (In reality, I would bet the entry was not quite so random as we might assume. Chances are, the pendulum was responding to the farmer’s instincts and knowledge of the market, so that little swinging pendulum probably had a lot of accumulated wisdom, patience (no one is patient like a farmer), and market knowledge baked in. Maybe that’s another “little thing”!)

There are a few lessons here: trading doesn’t have to be complicated, but little things matter. Also, traders often do not understand the source of their own success. I think this is one reason why so much lore and superstition have grown up in technical analysis–yes, someone was making money using a technique, but that does not mean he was making money because of it or even with it. When we don’t understand the source of our trading edge, it is very difficult to transmit that knowledge to someone else, but that is another topic for another day.

Most important, realize that a little thing can be the difference between success and failure. A small adjustment to your entries, exits, position sizes, risk management, trade management decisions, even to your lifestyle, research process, or mindset, can make a tremendous difference. That is a sword that cuts both ways–if you are struggling, sometimes success may come after a very small adjustment to your trading process. If you are successful, this is why discipline is so important: one small change, one small deviation from the path, and ruin may follow. Little things matter.

How Good Is Your Plan?