[dc]I[/dc] wanted to take a look at a short trade in gold we closed out yesterday in my research report I write for Waverly Advisors. There are a few good points here to consider: some stuff on multiple timeframe setups, managing trades with an eye to probabilities and not micromanaging, and the importance of stops and proper trade management. Today, though, I just want to start by thinking about how having a bias can be helpful or harmful. I’ve written on this before, but it’s a very important point.

First of all, I’ve had a pretty bearish bias on gold since September 2011. We actually caught the exact high of gold in our research, and I wrote about that specific trade in my book. (It was essentially an overextended trend, a failure test entry at the top, and watching action in silver for further context.) Now, right away we come to a few points about the idea of having a “bias”. I’ve seen many traders get in a lot of trouble having biases over the years, and, perhaps more than any other market, many people become very emotional in regard to precious metals. All of their political fears and existential dissatisfaction seem to boil down to a simple message of “buy gold” because the government is going to collapse or the black helicopters are going to take over or for some other reason. (Sadly, there are many “advisors” who capitalize on this tendency and write newsletters to feed the paranoia and panic. My personal belief is that emotions have no place in deriving your bias.

How can we have a bias and stay out of trouble? One simple rule will solve most of your problems: if you have a bias on a market, it has to be based on something you can see. At the risk of repeating myself, let me say that a few different ways, just to be sure it’s clean. If you have a bias on a market, check yourself for emotional reactions or commitments. Particularly, once you’ve made a public statement (even a simple tweet or post in a trading room, for developing traders), it is only human to shift your attention to defending that statement. This will get you in trouble, as a trader. I think many trading problems can be solved with a small adjustment to mindset: as soon as you are in a trade, you begin to shift your focus to finding reasons the trade is wrong. This is unnatural, to say the least. In everyday life, who argues like that? Who makes a point, and then immediately starts looking for reasons that whatever they just said is wrong? This, however, is very a very helpful perspective for the trader because too many traders ignore evidence that they are wrong (even their stops being hit, and it can’t get much clearer than that), and hold on to losing trades long past the point they should’ve exited. Many trading accounts have been destroyed by this practice, and many traders have left the field for some other endeavor simply because they couldn’t exit when they were wrong.

A logical extension of that idea is that a bias is only meaningful if you can clearly state what would disprove or contradict it. For instance, if I’m short because of a higher timeframe bias on a market, what should not happen? Well, the market should not “go up”, but that needs to be better defined—reasonable levels on that higher timeframe should not be broken, but I can’t use them as stops because then I am trading that higher timeframe. I have to take each trade on the trading timeframe as a standalone trade within context of that bias, but not looking to the higher timeframe bias for trade management information. We also can use price action on the trading timeframe to get clues that our bias is right or wrong. The trading timeframe will trend both up and down within the higher timeframe bias, but we should not see a lot of consolidation patterns resolve easily to the upside, and we should not see too many large standard deviation spikes to the upside. If we do, and if this continues for some time, it’s evidence of underlying bullish conviction, which contradicts our bearish bias. The exact points where you “pull the plug” on the bias might be up for debate, but the key is that you have conditions that would contradict your bias. Compare this to common amateur biases: you hate a stock because you hate the food at a restaurant, you had a bad customer service experience, you think a competitor’s product is best, you lost money in a stock so you are out for revenge, etc. Those types of bias seem to me to be less meaningful than a disciplined bias that you can understand and monitor as the market unfolds. 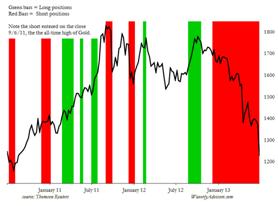 There is another potential problem with a bias; it can blind you to trades that set up against your bias. In this specific case, I’ve held a short bias on gold for over two years, based mainly on monthly (or quarterly) charts. That’s a very high timeframe perspective, and it’s important to realize that there can be play to the upside within that bias, so I’ve found myself and our clients long several times, when dictated by market structure. This is another skill that I think can help many traders. A bias is often nothing more than a higher timeframe structure. If you are a daytrader, maybe you have a bearish bias based on the weekly or daily chart. If you are a position trader, maybe your bias comes from monthly charts, but you do not know your bias is right! It may well be wrong, and, if it is a “good” bias based on structures that actually have a statistical edge, then, if it fails, it may fail dramatically. Wouldn’t it be nice to be able to participate on the right side of that failure, and maybe even make some money? You can’t do this if you are emotionally attached to your bias, and if you will not trade against your bias, but a better mindset is something like “I hold a bearish bias, but everything I see is screaming long in my face. Maybe I should get long on my chosen timeframe, manage the trade properly, and see what happens.” Easy to write, and easy to do once you’ve developed the right mindset, but it’s usually impossible for the struggling, emotional trader to do this.

Gold spiked sharply against us in yesterday’s (6/19/14) trading, with a nearly 6 sigma single day rally. This was easily the largest volatility-adjusted day since the market crested in September 2011, and our clients were short but also were able to take substantial profits out of the trade through proper trade management which, in this case, amounted to using a correct stop on the trade and having previously booked partial profits at predetermined profit points. I’ll discuss both of those points and how they were derived in a blog post soon, but, for now, spend some time thinking about your biases. I’ve written on this topic before, suggesting that many traders might be better without biases at all, but today, check your biases. See if they are truly based on something you can see, if you can clearly state what would contradict those biases, and if you have the flexibility to trade against them when needed.

Being right being wrong (and multiple timeframe analysis)

Failure is NOT always an option