Trends end in one of two ways 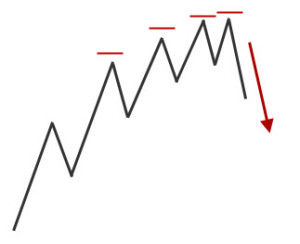 [dc]T[/dc]he last lecture looked at the power of an intact trend. Of course, trends do not go one forever. They do end, and they tend to end in one of two predictable ways. Consider an established uptrend that has shown a clear pattern of impulse move up, retracements against the trend, and then new impulse moves in the direction of the uptrend. At some point, buyers will lose some conviction and the market will start to stall around previous resistance. Perhaps resistance will still break, but the moves through will not be as sharp or as clean as they have been. Perhaps each upswing is smaller. We might characterize this market as being “tired”, or, in the language of technical analysis, momentum divergences are emerging on each upswing. Resistance is starting to hold against the trend, and eventually the trend will end. From a the perspective of simple chart analysis, this pattern often looks like a rounding top (or rounding bottom, in the case of a downtrend) on charts. 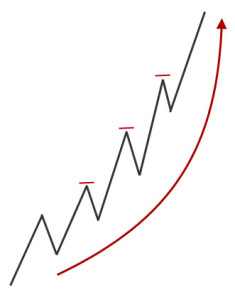 This is often a very quiet and polite way for trends to end, but there is another way–trends can also end in dramatic climaxes. In this case, the trend accelerates into a series of more and more dramatic trend moves and goes “parabolic”. Emotions get very strong in a move like this (which is why you, as a successful trader, must learn to control your emotions and stand apart from the crowd), and it looks like the market is going straight to the moon. At some point, the last willing buyer has bought and a vacuum is created on the other side. The market immediately collapses as bulls, who were feeling giddy with excitement, now panic as they realize they are caught on the wrong side of the market. As they scramble to exit, their selling pressure (in the case of an uptrend) further accelerates the selloff. Though traders are often drawn the possibility of outsized profits on these last swings, that potential for profits is accompanied by even greater danger. When the trend pattern breaks, it does so with a ferocity that can stun traders trapped on the wrong side.

Many traders are also drawn to the possibility of picking the top of bottom of a move like this, but imagine you successfully caught the top in that last blowoff trend. Now what? It is certainly possible that the uptrend will turn into an equally dramatic downtrend (anything is possible at any time in the market), but remember our first principle of market behavior: markets alternate between trends and trading ranges. It is more likely that the top you caught will now lead to a sideways trading range rather than an actual trend reversal. Your capital (financial, mental, and emotional) will now be tied up in an unproductive trading range as you agonize over each tick. Once you are in that trading range, now you have to watch and see if it is likely to break out into continuation of the original trend or eventually start a new trend in the other direction. There is money to be made here, but it is hard money. Most traders will have better success positioning with the direction of the intact trend than trying to pick the exact moment for trend reversal.

In the next post, a look at the last fundamental principle of price behavior: action around support and resistance.