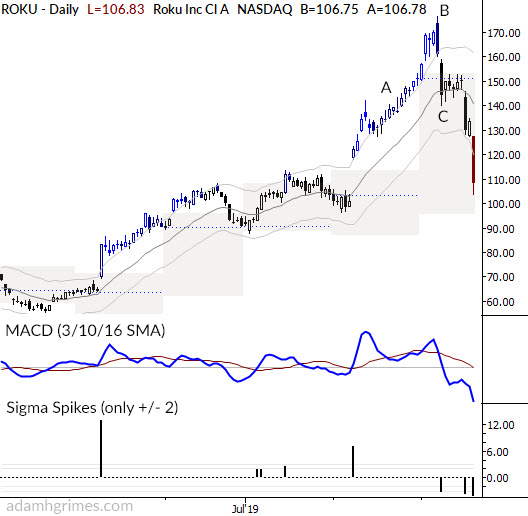 Stepping in front of a strongly trending market is one of the best ways to lose money. But trends do end, and sometimes those endings can offer great trades. How can we catch turns without the risk of being on the wrong side of a strong trend?

The Anti trade is one good answer.

The Anti is a special kind of pullback trade. It follows the first strong countertrend thrust, and often is the first sign that a trend has truly ended. Though not every trend sets up an Anti at the end, the ones that do offer great trading opportunities.

A good Anti will have all of the following:

Let’s look at this pattern on the recent chart of ROKU.

Look for an end

It’s impossible to boil down the reasons to watch for trend reversal to a simple rule, but the chart of ROKU (see point marked A) shows a strong trend that emerged several months before the start of the chart. The trend was healthy—a market-leading stock that had numerous consolidations along the way, and no real challenges to that trend.

With a final acceleration up to (B), we had all the pieces in place for a trend ending:

“Everyone” was bullish ROKU, and that’s a very dangerous condition for an uptrend.

Now, what should you have done at (B)? I would suggest the right answer is do nothing. If you were long, you were right. You should have probably already taken partial profits and been holding longs with a trailing stop.

If you wanted to short, this is a hard short. Where does your stop go? What do you expect out of the short? How many times had you tried to short over recent months? No, you should wait, and what should you wait for? A sign that the bulls in this market were about to lose.

Trade what you see not what you think

The thrust down at (C) was the first serious distortion in this trend in a long time. There are also several signs that true downside momentum is emerging:

There’s one more piece we need, and it’s important. Very strong trends can absorb shocks and keep on going. Even after a collapse like we’ve just seen, it’s not impossible (nor even that unlikely) that ROKU could have rocketed back to highs and kept on going. Countertrend traders live a hard life unless they wait for one more sign.

The bounce following (C) is an example of what I would call a “reluctant bounce”. Using such a subjective term is valid; the emotional responses of market participants reveal themselves in chart patterns. Rather than seeing strong upside momentum, the market sits there, very near the low of the thrust at C.

Clearly, something has changed with the stock. What next?

Enter the trade and manage the trade

The last step is that we want to get on the train when it is already moving in the direction we want to go. Once you see the pattern at C form, you can start watching for a short entry. (We placed ROKU on the short candidate list for our MarketLife Premium clients on 9/12/19.)

There are many tools you can use to enter the trade: draw a trendline under the consolidation. Enter on a break of the previous day’s low. Enter on a break of two days’ low. Go down to an intraday chart. Wait for a close below (but not too far below) any of these levels. This is where you get to put your own stamp on the trade. Use triggers that speak to you, and develop your own style.

As for expectations, I find a measured move objective is a solid target for most Antis. Some move much further. (This example went past its MMO.) But if you take at least partial profits at the MMO, you will build consistency that is often missing from countertrend trading.

This is a simple, clear example of a powerful trading pattern. If you trade either pullbacks or ends of trends, the Anti probably has a place in your trading repertoire. You can learn much more about it in my books and in the free trading course. If you haven’t started the course, what are you waiting for?! Go. Get started. Be the best trader you can be.

Gap and go or gap and crap?