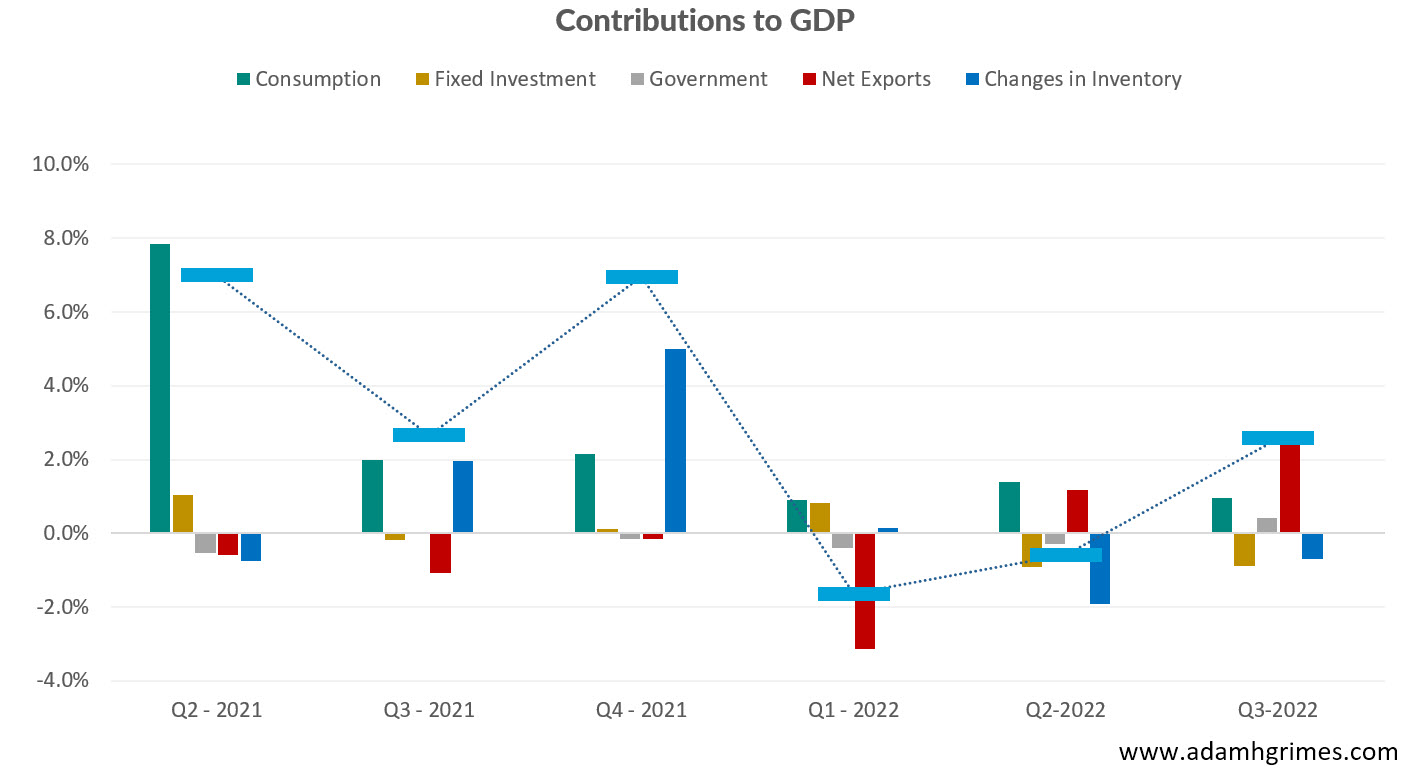 As we head into the end of the first month of the last quarter of the year, the major news behind us is a GDP report. Politicians and talking heads widely reported that GDP growth shows the economy is fine—nothing to worry about, really—and that we dodged the bullet by avoiding a recession.

This week, the Fed meeting will likely be closely-watched and a source of volatility. Be careful of carrying heavy (large) positions into the report.

We’re quite confident that a recession could also have been avoided by another redefinition of the term, but we don’t think the report is quite as positive as it appears on the surface. A look at the GDP contribution/decomposition in the chart above shows why.

All of the “growth” in GDP rests on net exports. This is a number that’s obviously likely to suffer under a strong dollar—in other words, this is not real, sustainable growth.

Furthermore, the real canary in the coal mine is consumption, which has been, and continues to be, tepid at best. The Consumer is not at all confident, and is curtailing spending across the board. We will also expect revisions (2 more are due before the GDP number is final) might not look as rosy, but those revisions will come after the midterm US elections.

Excuse our cynicism. While we remain staunch long-term optimists on both the Economy and the markets, we see plenty to be concerned about in the near term.

The best anyone can do in predicting price direction is to identify a small tilt in probabilities—this is the reality. It’s not sexy, glitzy marketing (CRUSH THE MARKETS WITH NO LOSING TRADES!), but it’s the reality real traders face every day.

At this point, patterns in major US and global stock indexes are still at least moderately bearish. Of course, these patterns could degrade and we could see substantial rallies into the end of the year. We could end the year at all time highs in indexes! We could head higher 40% next year! Benevolent aliens could show up next week and cure all human diseases and usher in an era of unprecedented peace on the planet.

All of these things are possible, but we wouldn’t bet on any of them today.

We’re currently watching these bear flags in daily indexes and will be on guard for further weakness. When something changes, so will we. (And that’s the best we can ever hope to be as active traders.) A little more strength on the daily chart would set up the first near-term longs we’ve seen in the while, which could lead to other trades in the same direction.

Earnings season continues in full swing, with about 1500 names reporting this week.