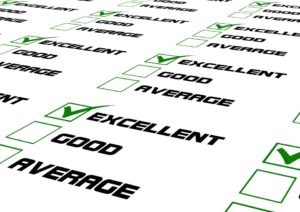 One of the things I’ve been thinking about recently is how to evaluate the quality of our decisions. This is a topic that traders probably don’t think enough about. Furthermore, much of the traditional advice is very bad and actively works against the trader trying to correctly evaluate her decisions. Let’s think about this topic a bit deeper.

One thing about trading scams is that they are predictable and repeatable. In some cases, the scammer might even be deceiving himself. Facebook trading groups seem to be the current lowest common denominator for ignorant, mis-guided advice, and I recently saw a scam that looks something like this: A guy claims to have made a few hundred thousand dollars from a few thousand dollars in just a few months. If you buy his course (which includes a ton of really cool “I am” affirmations to be said daily) he will teach you how to do the same thing.

Of course, there’s nothing new here. There are lots of excited people buying his scam, though whether they are new and genuinely deceived or paid affiliates, no one can be sure. I watched his silliness with minimal engagement until I saw him give what must be the worst advice to give a developing trader:

This is a particularly egregious example, but that advice, to look at your winning and losing trades separately, to avoid mistakes that gave you losing trades and to do more good trades, is pretty much the standard in trading education.

What’s wrong with this advice?

To a beginning trader (which we all were at some time), this seems like solid, obvious advice. Of course we want to make more trades like our winners and fewer trades like our losers, so what better way than to look at those trades and see what happened? Understanding the truth requires a deeper level of thinking.

To get to that level, ask yourself this question: are your trading results solely and completely due to your skill as a trader? Or is there some luck involved?

There are things in human experience where skill reigns supreme. Someone who has the skill will almost always succeed, with very few exceptions. From my personal experience, some examples might be: a skilled musician playing a piece of music, a competent chef cooking a piece of meat, someone threading a needle, or a skilled target shooter. In all of these cases, there might be mistakes and errors made, but you can pretty much bet that someone with skill will almost always accomplish that task.

On the other hand, we can think of cases where someone with supreme skill might sometimes succeed and sometimes fail: a skilled quarterback throwing a long pass, a golfer making a put, a poker player playing any one hand, or a trader making a trade. In these cases, we know there’s a very high chance of “failure” on any one trial. Maybe the poker player will fold the hand (but is that even a failure?) Maybe the trader will have a losing trader. (Ah, ask that question again…) Maybe a defender will tip the ball. So many things can play into the outcome that we can’t completely attribute success to skill.

Of course, we all want to make good decisions, and much of our training and education centers around learning to make better decisions. Even the mis-guided advice given by our trader above had a good intent—he wants to help people make better trades, but he misunderstands how to get to that result.

The problem is that the market is so random and outcomes are often not very well tied to decision quality. In other words, I can make great decisions in the market and have a losing trade. I can also make really bad decisions, sometimes strings of them, and make many winning trades. Of course, over a large sample of trades things will tend to work out as we might expect, but the point is that outcome from any one trade or even a few trades might have no connection to decision quality.

How, then, are we to evaluate the quality of our choices? The first, and most important thing, is to stop separating your trades into winning and losing trades before you evaluate them! Yes, I know this flies in the face of the advice you’ll hear everywhere else, but if you realize that good decisions are “just about as likely” to lead to good or bad outcomes (and vice versa) you’ll see there is no reason to look at your winning and losing trades separately.

Trade outcome is not a criteria you should consider. Rather, you should focus on the chain of decisions that led to making that trade. Some things we might measure are:

We know that most people who try to trade will fail to do so successfully. Even if we eliminate those who never took the pursuit seriously, the failure rate among those who genuinely tried and who worked very high is still disturbingly high. This failure rate is not likely to be due to any intellectual limitation (you don’t have to be that smart to trade well) or personality deficit (people with many different personality traits trade successfully)—I believe it’s due to people doing the wrong things and focusing on the wrong things.

The right things are often shockingly counterintuitive. Traders must learn to think in statistically-oriented sample sizes. Traders must avoid mistakes driven by cognitive bias, and to avoid the lure of the “obvious”.

If you’ve accepted that your trade outcomes are influenced, at least in part, by a noisy, sometimes random market, then think to the next step: your trade outcomes include a component of skill, and of luck. How can you evaluate trades to tease out the difference between the two? How can you better evaluate the quality of your decisions so you can make better decisions in the future?

What matters more than your process?

How to Get Started Trading? Answer #1: the Casual Approach