Interest rates are constantly in the headlines. When I talk to traders and investors, interest rates are one of the topics that always come up. There’s a great deal of fear and concern about higher rates and about what that might do to many markets.

If you’re sharing that fear and concern, let me offer a few points to consider.

First, we’ve come out of a very weird historical period in which rates did not move at all. The chart below shows the year over year change in the 3 month Treasury Bill rate, going back to 1950. See that big flat spot after about 2010? Yeah, that’s weird. 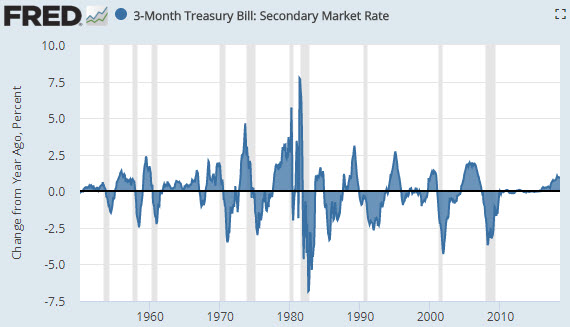 Third, we have many participants in markets who have just come on the scene since the 2008-2009 Financial Crisis. These players have no memory of a time when rates moved a lot and when shifts in rates were discussed, gamed, and modeled. (As an aside, recent data broke many of the predictive models for interest rates. (It’s ok, they didn’t really work that well anyway…)) There’s going to be a natural period of adjustment and recalibration while we probably simply work back to what is normal–an environment in which interest rates move a lot… because, historically, interest rates are pretty volatile.

Chartschool: TSLA, lessons from a trade that did not trigger

Chart of the day: entering on a bear flag in SLB

Chart of the day: Change of character in silver