Trading is a game of choices. Over time, we hope to make more good choices than bad. Sometimes, the choices are obvious: control your risk, take disciplined trades, be mindful of correlated risks, but other times the factors that separate good from bad decisions are more subtle. Today, let’s take a brief look at one important clue that can help us choose the best pullback trades. Take a look at the two charts below, which show two pullbacks setting up against the yen. 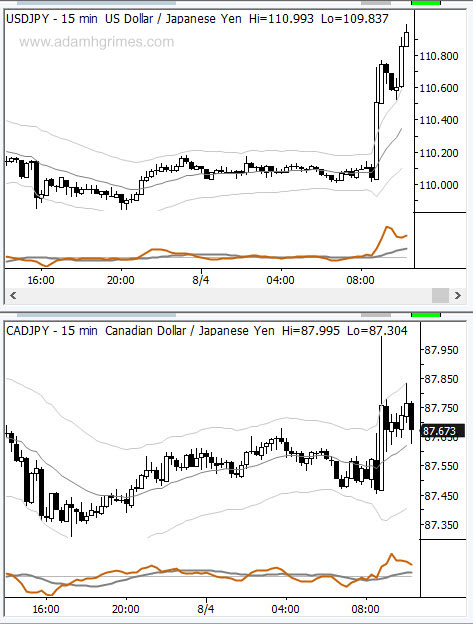 With any chart, there are many lessons and subtleties we can find, but I want us to focus on one specific thing today: the quality of the setup bar that precedes the pullback. Look first at the CAD/JPY example: the setup bar is a single bar, and nearly half the range of the bar is a shadow (wick). This likely indicates a lower timeframe buying climax, and certainly suggests that the buying pressure ran out of steam. If we were not aware of the large upper shadow (for instance, imagine removing it so we are only left with the body of the candle), then we might have a decent pullback setup in the bars following the big bar, but the buying climax changes the picture substantially. In fact, a good pullback rule is: don’t enter a pullback after a climax move in the direction of the trade.

Compare this to the USDJPY setup. In this case, we also had a minor buying climax on the setup bar, but the next bar traded decisively higher. The pullback that formed held above the upper Keltner channel, as opposed to the CADJPY pullback which formed closer to the moving average. These simple factors tilt the scales decisively in favor of an entry in the USDJPY instead of the CADJPY. Had the CADJPY been your only choice, you would have been better off skipping the trade (under the rule above.)

Anyone trading patterns in markets will soon run into the problem of how to pick the best trades. When I trade stocks, I’ll often have legitimate setups in 40 names. In currencies, you’ll see many crosses set up against the same currency at the same time. In futures, we have the same problem: we’ll see similar setups in GC/SI, CL/HO/RBOB, and even W/S/C (to say nothing of Chicago/KC wheat, for instance). You won’t always pick the best trade. In fact, you’ll many times have the experience of doing careful analysis and then watching one you didn’t choose explode to your profit target. (Same thing as picking the fastest lane on the freeway–good luck!) But, with careful attention to a few key technical factors you can pick the best trades more often than not.

With pullbacks, the quality of the move that sets up the pullback is one of the critical elements. This was the topic of this post, but we also should consider the character of the pullback itself, and we’ll do so in a future post. Have a great weekend.