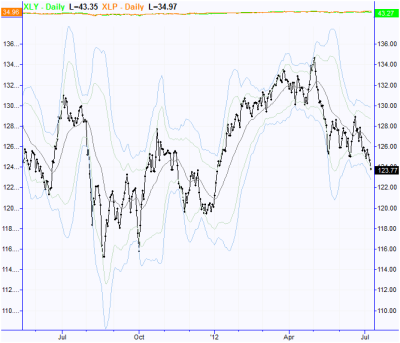 Traditionally, the spread of Consumer Discretionary stocks over Consumer Staples stocks has been taken to be a gauge of market sentiment—a clear expression of a cyclical sector compared to a defensive sector. Note that this is a coincident indicator, meaning that is has not led the market at major turning points. Rather it turns with or lags changes in the indexes, but this current weakness in the spread would be seen to be supportive of bearish trades. However, not so fast—there may be more going on here. An unusual element the current environment is a tremendous amount of relative strength and inflows into Consumer Goods, Staples and Healthcare stocks. Though these are traditionally defensive sectors, note that the historical record shows us they have led the first leg of large-scale bull markets in the past. In other words, we could potentially see a strong market rally led by these sectors, which would catch many market participants on the wrong foot. (Note that we do not yet see short-term support and justification for a rally, but we do see a clear longer-term bullish setup for major indexes.) So, this is a case where the XLY/XLP spread could be distorted by this unusual strength and could possibly be misleading.

Why Is Trading So Hard?