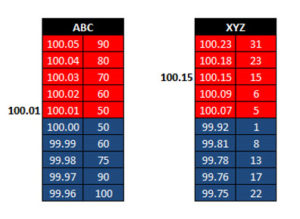 I received a good question from J last week:

As you know, I’ve recently switched to using Stop Limit orders for entries after experiencing a lot of slippage last month on one trade.

Today I had the other problem: I missed an entry entirely because my Stop Limit order wasn’t filled as price moved through it – I had set the stop at 90.33 and the limit at 90:35. [and the stock moved through the limit price during the trading day (rather than gapping open above it).]

This is a good question about trade execution.

First, the basics: a stop order goes above the market for a buy and below the market for a sell (as opposed to a limit order which goes below for a buy and above for a sell.) If you find this a bit confusing, just realize that a stop will always give you a “worse” price than the current market price. But the reason you will accept that tradeoff is that the stop will get you in when the market is moving in the direction of your trade.

Now, technically a stop order becomes a market order if hit, which means it can be filled at any price. This might not be something you want. What if, for instance, the market gaps open beyond your stop? Maybe WAY beyond your stop? Do you want to be filled there?

This is where the stop limit order comes in: it’s a stop order that also has a limit price so that when the order is hit, it becomes a limit order rather than a market order.

For instance, let’s say you put a buy stop at $100. First, where is the market when we enter this order? It must be BELOW 100, otherwise we’d be filled immediately (or the order rejected by the trading platform, depending.)

Now, what if the market gaps open at 110 tomorrow morning and your order is still working? You’ll be filled somewhere around 110.

What if we had a stop limit with the stop at 100 and the limit at 101? In that case, we would have seen a limit order working to buy at 101 (now below the market) and would not have been filled.

So, this is the tradeoff: the stop limit lets you reduce slippage at the cost of maybe missing fills. There’s always a tradeoff.

In general, I tend to think of stop orders as living in two different tiers of urgency: 1) entering new positions (in which case I might accept a missed trade) or 2) exiting existing positions. If I’m protecting an existing position, I want to be filled so I will use a very wide limit.

What’s a wide limit? Maybe 10% or more of the asset price (or a few ATRs if you want to think in volatility). Essentially, I want to place a very wide limit that protects me from some stupid error (e.g. being filled at 1,000 on a 100 order (which would be a broken trade anyway once it’s reviewed), but gets me out even in extreme volatility.

In the case of entering a trade, it’s more complicated. I will accept some slippage, but I have to decide what I’m comfortable with. In your specific case, I have to ask myself what the order book is likely to look like for the stock you’re trading. If it moves strongly intraday could the spread be .03? .05? even close to .10? Yes to all of those, but .25 is unlikely. So… I probably would have used your stop limit order but with a .10 or .15 stop.

If you’re a swing trader with orders working overnight, you should also review your stocks just before they open to watch for big gaps. A stock might well gap beyond your entry price and you may want to go the market for a fill… or not. But you can only make this decision if you are at the screen and can decide. Whatever you do, you absolutely want to pay attention to limit orders left working when stops are elected. These could be missed trades, or something very bad happening to existing trades. Make sure you see these and address any issues.

Basic backtesting in Excel: Getting data

A look at global relative strength