Here’s a question from Alexander:

I understand TA to some degree, I studied your book and the wonderful video course. But sometimes I can still look at a chart and not have a proper bias to as of where the price will continue to go. I can make an argument for both sides or literally have no bias at all. For example USDGBP there’s been more upward momentum presently but does that erode away all of the downward strength and mean i should start positioning myself against it. i guess what im asking is what can I study/do to help myself get a better understanding of current market behavior (i trade daily between the LTF and its HTF)

What a great question! The answer will tell us some important things about markets, technical analysis, and probabilities in general.

Can always make a case for any outcome

First of all, it is always possible to make a case for up, down, or sideways on any chart. Yes, on any one chart—I don’t mean considering higher and lower timeframe influences, or by adding indicators you don’t normally look at. Just simply taking a single chart as-is, you can always make a good case for any of those three outcomes.

Take a look at the chart below, on which I randomly drew an arrow. Now, let’s make a case for each scenario. 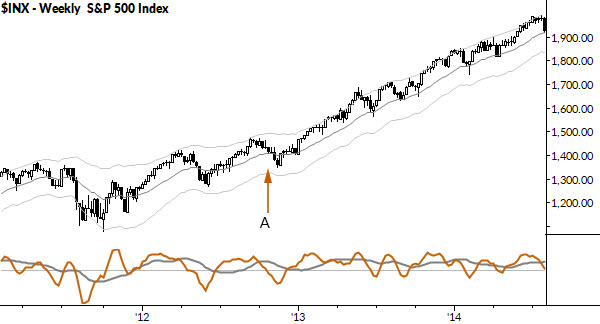 Up: This market is in an uptrend, making higher highs and holding higher lows. The volatility at the left edge of the chart was absorbed and led to new upside. I would posit that the current weakness is just a pullback in the ongoing uptrend.

Down: The most recent high was only a minor high, showing a lack of conviction and followthrough. In fact, we can see that every time this market either makes a new high or touches the upper channel, it backs off—this doesn’t seem to be indicative of a market with real buying power behind it. Also, MACD shows a bearish divergence against the recent highs.

Sideways: This is  market trading without any real conviction. While we might basically accept the “down” argument above, lack of interest and momentum suggests that both down and up will be limited, and most likely outcome is to see recent highs define some kind of resistance (which we could argue goes back to the left edge of this chart.)

Those aren’t super compelling arguments, but if you only get one thing from this answer, get this: It is always, without any exception, ever, possible to make a case for up, down, or sideways, based on technical analysis. If you look at a chart and you don’t see all cases, you’re either blinded by your bias (Danger, Will Robinson…), don’t have a deep enough toolbox, or you’re just missing something. It’s a call to do better and to think deeper.

This would seem to be bad news for technical analysis. After all, shouldn’t analysis be simple and clear with only one possible outcome?

Well, no. Some cases are much more compelling than others, and it’s through the weighting of those possible outcomes (whether this is in a subjective or objective decision model format) where we start to understand how markets really move.

Without being arrogant, I can tell you with absolute certainty that it’s possible to do find a strong directional edge while considering all outcomes. In addition to my personal trading, I’ve walked the tightrope in public, publishing my daily analysis of markets and market direction every day for nearly 9 years, without missing a day. My read of market direction has become practically legendary in that time and I’ve lost count of the times clients (both institutional and individual) have said things like “you were the only person I read who was right about ________.”

I’m not telling you this to tell you how great I am! (For one thing, I’m wrong a lot too.) But, rather, to show you that it’s certainly possible to have a good edge on market direction using simple tools and always considering a range of possible scenarios.

The reality is that not all of the scenarios you come up with will be great. You start to really gain “forecasting power” when you’re able to figure out which scenarios are more likely, how much more likely they are, and why. This, to me, is the essence of market analysis.

What can we really predict?

There’s another issue swirling around here. One of the most useful phrases in market analysis is “I don’t know.” Do not be afraid to use this!

Market are, many times, completely unpredictable and random. The “bar by bar” guys write great books telling you what you should have seen on every bar and pointing out the significance of every tick, but this only works in hindsight. The mystical math-challenged guys (Elliott wave and Fibonacci) will show you charts where magic numbers predicted every turning point. Overfit quant models using higher-order parametrics show you predictions that lie along a straight line with outcomes. But all of these fail going forward, with astonishing regularity.

Why? I think it’s because they fail to embrace one of the core truths of the market which is that markets are messy, noisy, and highly random. Much of the time—most of the time—markets are completely unpredictable.

Take a moment for that to sink in: if we’re being intellectually honest, most of the time we should have no bias or opinion whatsoever, and the best we can say is “we don’t know.” Markets are usually unpredictable. The art lies in finding those moments when markets are “just a little” predictable, and then figuring out where the most probable price path lies.

What to do with this?

Of course, there’s a gulf between any successful analysis and trading. It’s deceptively easy to have correct opinions about a chart, but much more difficult to implement those opinions and to crystallize them in actual trades. (One reason is that those opinions were usually not as good as we thought, in the first place.)

I think an analytical framework that respects the unpredictability of markets is a good place to start. From there, if you wish to use a subjective chart analysis framework (which, again, can be very effective) work to actively cultivate the skill of holding multiple outcomes in your head, and then weighing which are most likely.

There’s no holy grail in technical analysis, but this is maybe as close as we come.