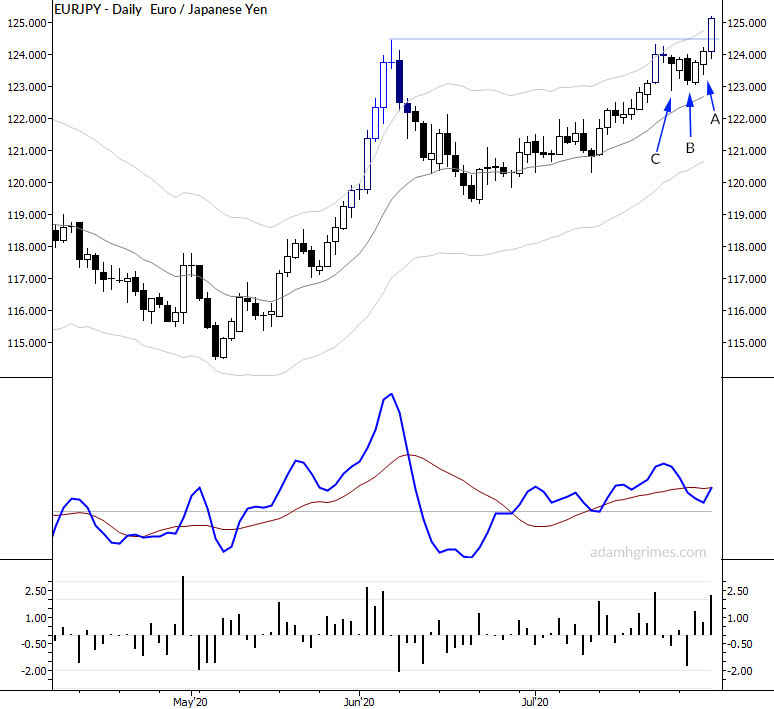 Patience is a critical skill in trading. But, like everything, balance matters. Being “too patient” is as bad as being impatient. How do we find the balance?

One answer is to think about how and where patterns fail.

The chart above shows a trade that we discussed daily with our MarketLife members. (Sign up today using the code options20 for a 20% lifetime discount). The setup pattern was attractive for a few reasons:

When is failure ok?

Look at the bar marked B. I was ticked into a long entry at the high of that bar, and made the decision to hold, despite a pretty crummy close. (My stop was not hit.)

B is pretty obviously a failure, but it’s not a failure that is cause for concern. Why? Because it is still within the pattern. Even though there was some price movement above the previous high, the market was simply holding within the flag on the daily chart.

At A, the situation becomes very different. I commented in the evening video that this was a point where we did not want to see failure, and that I would exit the trade if there was no followthrough.

As you can see, everything worked out and the cross exploded into my 1R profit target this morning, but the point is that A was a turning point. Once momentum starts moving in your direction and the pattern is clearly broken (out), failure becomes much less acceptable.

By the way, one of the things you’ll hear technical traders say is “context matters”, but then context is often poorly defined and it seems impossible to explain. This is a good example of context—if you put the bar labeled B after A, then B becomes a very bad signal indeed.

Context is about what is around and before the specific pattern under consideration. This is a pretty simple and clear example of effective use of context.

To my thinking, this has everything to do with trade management. If we understand that B was not really a failure, and that C absolutely was not (C is actually constructive), then we can structure our actions so we don’t react to moves like this.

On the other hand, once we realize that something is different at A, we can tighten the stop up to somewhere around/just below/just above A’s low, and give the trade time to work.

There’s always noise and random motion in the market, so we will never be 100% right with this. (This is one of the reasons that trade review must be done over a large sample and we absolutely must avoid focusing too much on any one trade outcome!) But guidelines like this can help shape our actions and can be a key part of a trader’s profitability.

Could stocks be ready to break out? What’s your plan?

Did you miss a trade?